Molnár-Institute’s proprietary software suite, DryLab®4, includes a Robustness Module that can facilitate liquid chromatography method development, by model-optimizing HPLC relevant method parameters and designing robustness into final methods. This can eliminate inherent method failures – out-of-specifications – often presenting during an in-routine use of a method or followed by a vertical method transfer.

Back in 2011 the first study to explore how the DryLab® robustness modelling features could be employed to more thoroughly evaluate methods prior to validation, was led by Dr. Kate Monks of the Molnár-Institute, assisted by the institute’s founder Dr. Imre Molnár and Dr. Hans-Jurgen Rieger. Other industry partners also contributed to this research from TEVA Pharmaceutical Works based in Gödöllő, Hungary [1].

Their 2011 study ‘Quality by Design: Multidimensional exploration of the design space in high performance liquid chromatography method development for better robustness before validation’ set out to systematically develop an optimal, robust and fast UHPLC method for the simultaneous assay of two APIs of an eye drop sample and 9 known impurities, in accordance with Quality by Design (QbD) principles. The team employed the DryLab® chromatography-based modeling software to generate Design Space along with Method Operable Design Regions (MODR) that could then be employed to determine the final method conditions and to evaluate robustness prior to analytical method validation. Modeling was carried out using DryLab®2010 v.4.0, with quantitative robustness evaluation of generated models performed with DryLab® Robustness Module v.1.0., which uses simulated data from created models to carry out a full-factorial robustness calculation scheme, registering responses including critical resolution (Rs,crit)  and run time.

The Robustness Module specified tolerance windows for influential factors and their effect on resolution changes to be mathematically calculated from the outset. Extended multifactorial robustness testing consisted of keying in the nominal values for gradient time, gradient steps, temperature, pH, flow rate, start %B, end %B, dwell-, and extra-column volume i.e., the conditions of the selected working point. Full-factorial design of experiments around the setpoint was then  automatically generated; and finally initiating the calculation of the responses (calculation time is less than 1 min). This resulted in a robustness space – a multidimensional space formed by tolerance windows of critically influential separation parameters – and which also served as a scientific evidence that the method was able to deliver consistent results over its intended lifetime.

This being said, the team succeeded in developing a method that successfully passed through validation and has subsequently been used regularly and without any discrepancies. Another advantage of using modelling software programs was the limited amount of required experimental data and at the same time, the ability of examining a large number of possible run conditions, with experiments run to confirm predictions. In other words, the model-approach maximized the information content of the initial experimental data while allowing a minimum number of final experimental runs to demonstrate robustness.

“This data in the future can on the one hand serve as a common medium of discussion between analysts and between analysts and overseeing regulatory bodies, and on the other help to easily and quickly diagnose any problems which may be encountered during the lifecycle of the method,” the study concluded.

The second study, from 2018, examined analysis of Cannabis sativa extracts as an example of a typical DryLab® development workflow, with robustness integrated during the method development phase into the method [2].

This study was led by Professor Szabolcs Fekete and colleagues from the School of Pharmaceutical Sciences at University of Geneva/Lausanne, collaborating with Imre Molnár for the Molnár-Institute.

Their study ‘Implementation of a generic liquid chromatographic method development workflow: Application to the analysis of phytocannabinoids and Cannabis sativa extracts’ proposed a generic approach, with the main focus on HPLC modelling software modelling of the most important method parameters such as gradient conditions, mobile phase temperature and pH within a narrow range – which required only 12 model input experiments. The resulting model was then used to optimize peak-selectivities and resolution of the selected compounds. Furthermore, the model’s unique in silico flexibility was utilized to fine tune other modelled terms, like the column efficiency, by adjusting column length and mobile phase flow rate. Finally, a full-factorial virtual calculation was performed to quantify robustness. Robustness success rate and regression coefficients were estimated in about one minute, again without the necessity of running any wet-lab experiments.

The Geneva/Lausanne School of Pharmaceutical Sciences also joined forces with the Geneva University Hospitals (HUG) to carry out another study in 2018, which examined method optimization, including method transfer and Robustness Assessment, in liquid chromatography and mass spectroscopy (LC-MS) application, as the preferred way for characterization of the injectable antineoplastic agents used in chemotherapy [3].

This research developed a three-step method, starting with preliminary screening of several stationary and mobile phases, including various organic modifiers and pHs.

Followed by this, a model-optimization procedure aligning changes of mobile phase temperature, gradient profile and pH on the basis of 12 actual experiments was performed.  The produced retention model was found to be highly reliable, with average error under 1% in terms of predictive accuracy. The developed LC–MS method was successfully applied to the analysis of pharmaceutical formulations, the final model optimized separation was achieved with a mobile phase consisting in 10 mM ammonium acetate at pH 5.1 and acetonitrile, using a Waters CORTECS® T3 column operated at 25°C with a gradient time of 17.5 min at a flow rate of 0.4 mL/min.

A robustness testing step was also assessed from the virtual experimental design. Success rate and regression coefficient could be evaluated without the need to perform any real experiment that can be a critical aspect when working with highly toxic drug substances.

As the study concluded: “The high selectivity of the developed method paves the way for a wide field of applications such as the pharmaceutical formulation analysis (quality control or stability studies), environmental monitoring and biological samples analysis (TDM, toxicological studies). Indeed, the applicability of the method was demonstrated for the analysis of chemotherapies and wiping samples. Next experiments to be conducted concern the evaluation of quantitative performance according to the routine application and the nature of sample matrix through an analytical method validation process of the overall procedure including sample preparation, separation and detection.” 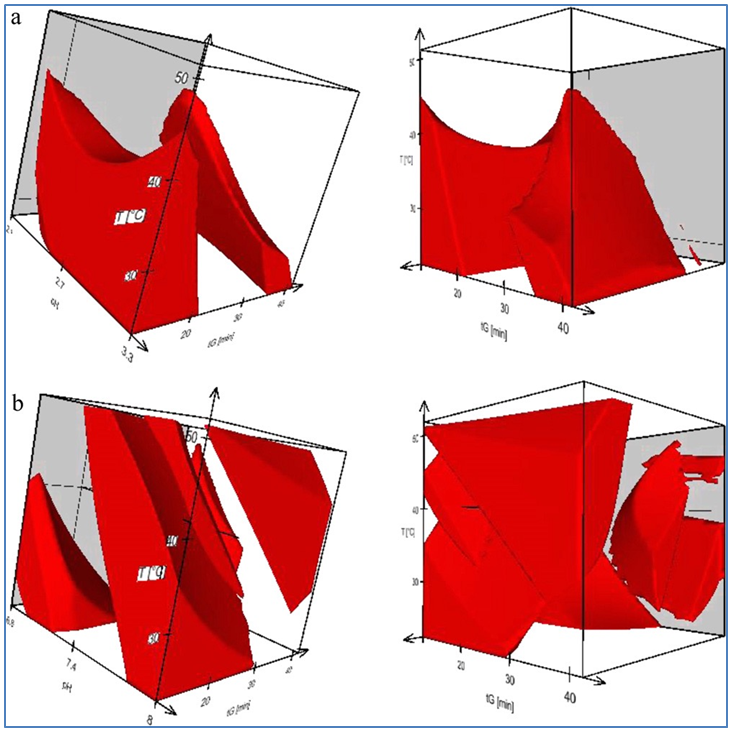 Robustness space for eye drop APIs modelled in 3D:  Cube A for tG–T–pH cube at acidic pH, using AN as eluent B and Cube B with tG–T–pH cube at neutral pH, using AN as eluent B. When all working points (combinations of measured parameters) with a critical resolution below 1.5 threshold are removed from the resolution spaces, robustness of separation can be visualized with red regions representing robust above baseline separations.