While stainless steel has been the most commonly used material to construct liquid chromatography instruments and columns due to its corrosion resistance, manufacturability, and its inertness to a wide variety of chemical compounds, it does have some drawbacks. Certain classes of analytes, such as metal chelating compounds/Lewis bases can interact with metal oxide films due to the electron deficient nature of these metal ions. For example, electron rich analytes such as phosphate and carboxylate groups can readily adsorb to the electron deficient surfaces of stainless-steel within the flow path of the chromatographic system. Such interactions can result in poor chromatographic peak shape, severe analyte losses, and quantitative inaccuracies [1],[2].

A previous approach used to address this issue, adding metal chelators such as EDTA, citric acid, and acetone to the mobile phase, can have undesired impacts on chromatographic selectivity and MS detection sensitivity. Another alternative also previously tried, using metal free columns, such as Polyether ether ketone (PEEK), also has functional problems, particularly in being unable to withstand the >5000 psi pressures normally required by UPLC and in being incompatible with organic solvents such as tetrahydrofuran (THF), dimethyl sulfoxide (DMSO), and chlorinated hydrocarbons.

Their method development process was performed according to AQbD principles that incorporates risk assessment and design of experiments (DoE) to investigate interaction effects on the method performance. The output of DoE identifies a Method Operable Design Region (MODR) of robust operating conditions for the method. (Figure 2)

Their experiments were performed using an Arc Premier System that is equipped with a column manager and solvent select valve to allow for automated exploration of a wide range of conditions, with Molnár-Institutes DryLab® 4 method development software used to automate the method in compliance with AQbD principles to allow for better understanding of the various chromatographic effects on the performance of the method.

DryLab® is since 1990 an AQbD software that is commercially available. Here, it was used in combination with Empower to develop methods in compliance with AQbD principles and automate the whole method development process by creating all the needed methods within the Empower CDS. The workflow for DryLab® -Empower for automated method development process involved multiple steps ranging from DoE to Robustness Assessment (Figure 2).

The DoE approach was implemented to develop a method in compliance with AQbD principles. Several experimental designs are available within the DryLab® Software to be used for method development depending on the type/number of variables that are desired to be studied. In this study a three variable (3D) experimental design was selected with gradient time, ternary modifier composition (acetonitrile: methanol-ratio), and temperature selected as variables to be studied. The total number of experiments included in this DoE was 12 and this was performed for two stationary phases (HSS T3 and BEH C18) on each chromatographic system. When the DoE was selected, it was automatically exported to Empower, creating all the methods and method-sets needed for these runs. After all experiments were run on both systems, data processed in Empower were imported to DryLab®. For each DoE, the peaks were then automatically tracked over the 12 different chromatograms. This was performed four times for both systems (Table 1).

Table 1. Summary of range of chromatographic conditions studied in the scouting experiments

DryLab® Software tracks peaks across the different chromatograms based on their areas. While this feature is reasonably accurate in tracking the peaks, sometimes manual intervention for assigning the peaks is necessary. For example, in the case of coelution the software allows for manual “splitting” of coeluting peaks and reordering/turning peak positions which makes peak tracking more accurate. Another important feature in the software that enables even more accurate tracking by automatically importing the Apex m/z (ACQUITY QDa Mass Detector) values for all the peaks which helps confirming that the peaks are accurately tracked.

After data was processed and all peaks correctly tracked, the software automatically built models to create a resolution map for the combinations of conditions where desired resolution between peaks was achieved. Although the initial scouting conditions showed already acceptable separations, using the calculated model, the method performance in terms of critical resolution, run time and robustness could greatly be improved on both MaxPeak HPS Columns (the HSS T3 and the BEH C18). The two corresponding resolution maps were then compared for these columns on the Arc Premier System (Figure 3).

Robustness of the final method was assessed using data from the models in the previous experiment, considering instrument tolerance limits at the selected Working Point and the failures that can occur because of fluctuations in method variables and parameters. This assessment showed the method would provide a minimum resolution of 2.1 between all the five peaks at all times.

A control strategy was also proposed based on the outcomes of the robustness and risk assessments to determine controls that need to be put in place to obtain consistent performance. The robustness assessment showed the range of resolution values that could be expected during routine use and the method parameters that had highest influence on separations, here found to be flow rate and gradient time. This contributed to a more efficient method control strategy by identifying the critical separation parameters, which could be setup and easily controlled using the instrument method.

In order to verify the results as predicted based on the Robustness Assessment, multiple verification experiments were run under the final conditions that were obtained from the Robustness Assessment. These experimental predictions were closely in line with observed performance. The developed method was very reproducible with %RSD values for retention times, peak areas, and resolution of ≤0.5% for six replicate injections. It was also observed that the USP tailing for all the peaks was ≤1.1 indicating that the Arc Premier System in combination with the MaxPeak Premier BEH C18 Column provided great peak shapes for phosphorylated compounds.

Overall, the team concluded that analysis of phosphorylated compounds using an Arc Premier System in combination with MaxPeak Premier Columns provided superior chromatographic performance when compared to stainless-steel hardware and that use of DryLab® in conjunction with Empower and Waters systems was very beneficial for automating the whole method development process, needing only 12 experimental runs and embedding AQbD principles to obtain a robust and reproducible method.

Founded in 1981, Molnár-Institute develops DryLab®4, a software for UHPLC method modelling for a world-wide market. Its powerful modules allow for the most sophisticated method development as required across pharma industries and regulatory bodies. Analytical scientists use DryLab® to understand chromatographic interactions, reduce runtimes, increase method robustness, and conform to Analytical Quality by Design (AQbD) standards.

The Molnár-Institute is since 1986 a registered vendor to the US FDA, CDC and many other regulatory bodies. DryLab® has pioneered AQbD, long before regulatory agencies across the world encouraged such submissions. Widely implemented by thought leaders, the software contributes substantially to the paradigm shift towards a science and risk driven perspective on HPLC Quality Control and Assurance. 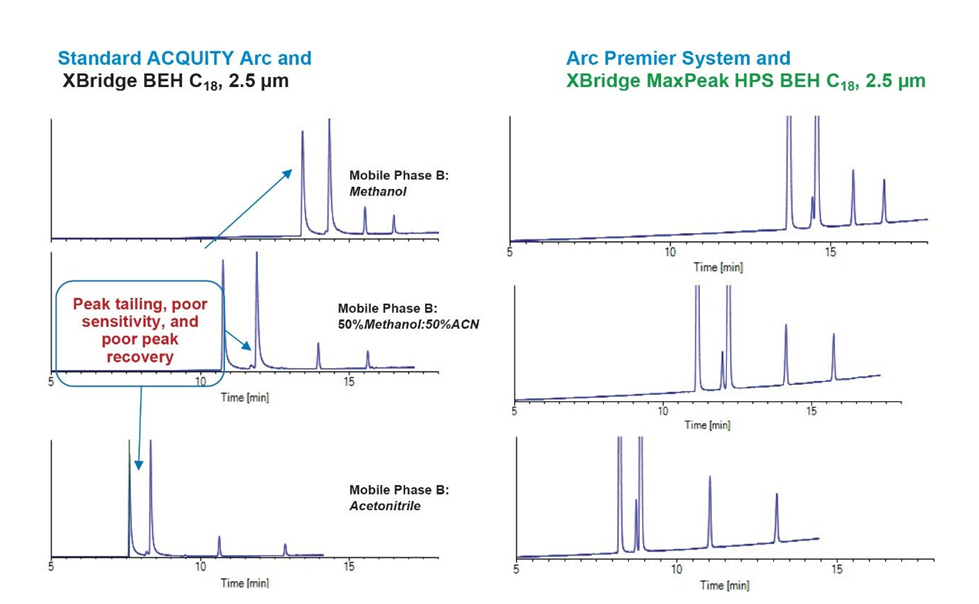 Figure 4: DryLab® screen images of separation models for the two Premier Columns on the Arc Premier System. Colored resolution maps plot experimental parameters (x-axis: Gradient and y- axis Temperature Time), with color code describing critical resolution of the chromatogram obtained at a certain set of tG and T conditions. The cursor in the resolution maps points to the condition of the “Set Point”.