Berlin: – A series of academic studies highlight the possibilities opened up by DryLab® from Molnár-Institute – a software platform to exploit flexible in-silico choices in design space modelling in high performance liquid chromatography.

The studies were carried out between 2018 and 2020. All three studies confirm the efficacy of DryLab® in-silico multi-dimensional modelling for optimizing separations and method development, enhancing robustness and smoothing method transfer.

Application to analysis of phytocannabinoids

The first study, published in March 2018 in the Journal of Pharmaceutical and Biomedical Analysis (JPBA), concerned ‘Implementation of a generic liquid chromatographic method development workflow: Application to the analysis of phytocannabinoids and Cannabis sativa extracts’ [1].

This team was led by Dr. Szabolcs Fekete, joined by other researchers from the School of Pharmaceutical Sciences, Universities of Geneva/Lausanne, along with Molnár-Institute President, Dr. Imre Molnar. Their focus was on development of a generic liquid chromatographic method development workflow, that could be successfully applied to the analysis of phytocannabinoids and Cannabis sativa extracts.

The team’s four-step method development procedure commenced with screening of primary parameters (i.e. stationary phase type, organic modifier nature and approximate mobile phase pH) using a generic gradient on a short narrow bore column, using a system, able to accommodate numerous solvents/buffers and columns. Instead of complete peak tracking, the number of peaks that could be separated, was adopted to save time.

The second step was to optimize parameters such as gradient conditions, mobile phase temperature and pH within a narrow range, requiring only 12 initial experiments and the use of HPLC modeling software for data treatment. This allowed identification of the best retention and selectivity for the selected compounds. Peak tracking was performed with a single quadruple mass QDa-detector in single ion recording mode, and UV detection in a broad wavelength range.

In the third step, the team carried out a refinement step to allow to further adjust column efficiency, by tuning column length and mobile phase flow rate, all done virtually using the modeling software.

Finally, the virtual experimental design was used to evaluate robustness, with success rate and regression coefficients, measurable within around one minute, without the need for physical experiments.

DryLab® was born out of pioneering work on in-silico retention modelling by Lloyd Snyder and coworkers in the mid-1980s, initially based on a “one factor at the time” (OFAT) approach to method development for isocratic separations (DryLab® I) and later for gradient installations, with DryLab® G.

A further step forward in 1996 was the creation of the 3-D ‘cube’ [2] resolution map and state-of-the-art Robustness Module now incorporated DryLab® 4. The cube can work with three experimentally measured parameters: including gradient time (tG), temperature (T), pH or ternary composition (tC) or additive concentration (aC) for ion-pairing reagent or buffer- concentration) and calculate eight  other parameters, such as dwell volume, extra-column volume, flow-rate, startB%, endB%, column length and column diameter, and particle size, to show why methods might fail, mostly due to peak movements. The robustness calculation can handle 3-level variations for each of the above factors, resulting in 36=729 virtual experiments. Flow-rate and dwell volume tolerances can also be additionally modelled.

The creation of this kind of model is inherently more efficient, due to the simple measurement of peak positions and their movement caused by alterations of the most important parameters such as tG, T, pH, tC or aC. With data generated out of only 12 input experiments, once the peak-table is matched, DryLab® 4 can create multi- dimensional resolution models, which are able to predict reliably critical resolution and retention times for millions of chromatograms, from which the best robust separation conditions can be very quickly identified.

This team set out to develop a smooth, fast and robust method for automated ultra-high-performance liquid chromatography (UHPLC) separations, that would be free of human errors and account for the majority of problems in securing regulatory approval that complies with the FDA’s Data Integrity and Analytical Quality by Design (AQbD) stipulations.

In order to achieve a state-of-the-art automation, DryLab® commercial software was used to model the testing of a mixture of 10 drugs. Following AQbD-principles, the team selected best available working point before performing confirmational runs on the six worst cases of the conducted robustness calculation. Simulated results were found to be in excellent agreement with the experimental ones, proving the usefulness and effectiveness of an automated, software-assisted analytical method development.

Towards in silico analytical method development

“As it was demonstrated in this study, automated execution can be utilized for reliable and accurate chromatographic model creation, verification and working point robustness simulation for a real-life sample. Modeled results were subsequently underpinned per experimental confirmation using an automation tool and were found to be in excellent agreement. These possibilities will allow a step forward to the upcoming tendency of in silico analytical method development.” [3]

Dr. Fekete joined lead author Dr. Dániel Enesei and fellow researchers from Budapest-based Egis Pharmaceuticals Plc. for the most recent of the three studies, concerning ‘Updating the European Pharmacopoeia impurity profiling method for terazosin and suggesting alternative columns’, appearing in JPBA in May 2020 [4].

This study was inspired by the demand of European Directorate for the Quality of Medicines and Health- Care (EDQM) for a new LC-based method for terazosin impurity profiling to replace the old European Pharmacopoeia (Ph. Eur.) method. This new method now forms part of the new Ph. Eur. monograph proposal of terazosin in Pharmeuropa issue 32.2.

The aim of the method renewal was to cut the analysis time from a total of 90 minutes for two separate chromatographic separations to a single procedure that could be performed in under 20 minutes.

The earlier use of two separations was dictated by the fact that two of the terazosin impurities were not sufficiently retained in reversed phase (RP) conditions, even using 100% water as eluent. Therefore, an ion-pair (IP) chromatographic method also had to be applied to isolate these elusive impurities.

The team of Imre Kapui new proposed method makes it possible to increase the retention of the two critical compounds using an alternative pentafluoro-phenyl (PFP) stationary phase in place of the C18 phase suggested by the original Ph. Eur. method). This and DryLab made it feasible to separate and adequately retain all the impurities. The detection wavelength was also changed to a more appropriate one for the detection and quantification of all impurities using perchloric acid in the mobile phase at low pH.

A further study team goal was to develop a generic workflow and to evaluate the chromatographic resolution in a wide range of method variables and suggest some replacement columns for terazosin impurity profiling. DryLab® Retention modeling was applied to study the chromatographic behavior of the compounds of interest and visualize resolution for the different columns, where a given criterion is fulfilled. A zone (set of chromatographic conditions) of a robust space could be then quickly identified by the overlay of the individual response surfaces (resolution maps).

It was also demonstrated that two columns from different providers (Kinetex F5 and SpeedCore PFP) could be used as replacement columns (See Figure 2), providing sufficient resolution at the same working point and a high degree of robustness.

The study team concluded that their real-life case study formed a good and representative example to illustrate the implementation of an early stage robustness study. Based on 12 initial experiments on a given column, retention modeling could be used to estimate robustness with impressive accuracy.

“Finally, a single robust method was developed and proposed (20 min analysis time) to update the old pharmacopoeia method. The fact, that retention modeling was involved, makes the method adjustment more flexible, since “adjustment” of the set point is not considered to be a “change”. Therefore, slight deviations of method variables can are allowed in order to meet the criterion of the separation (e.g. when transferring the method). Thus, method revalidation is not necessary,” the study notes.

“This study also demonstrates that common column tests are hardly applicable in practice to find alternative columns,” the authors concluded.

The Molnár-Institute is a registered vendor to the US FDA, CDC and many other regulatory bodies. DryLab® has pioneered AQbD long before regulatory agencies across the world encouraged such submissions. Widely implemented by thought leaders, the software contributes substantially to the paradigm shift towards a science and risk driven perspective on HPLC Quality Control and Assurance. 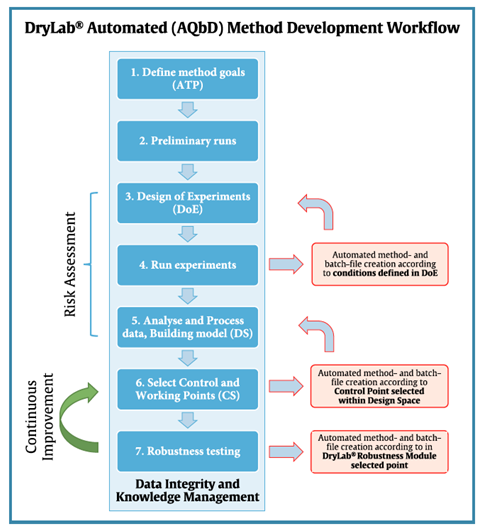 Figure 1. Scheme of an AQbD method and its automation, developed with DryLab®4 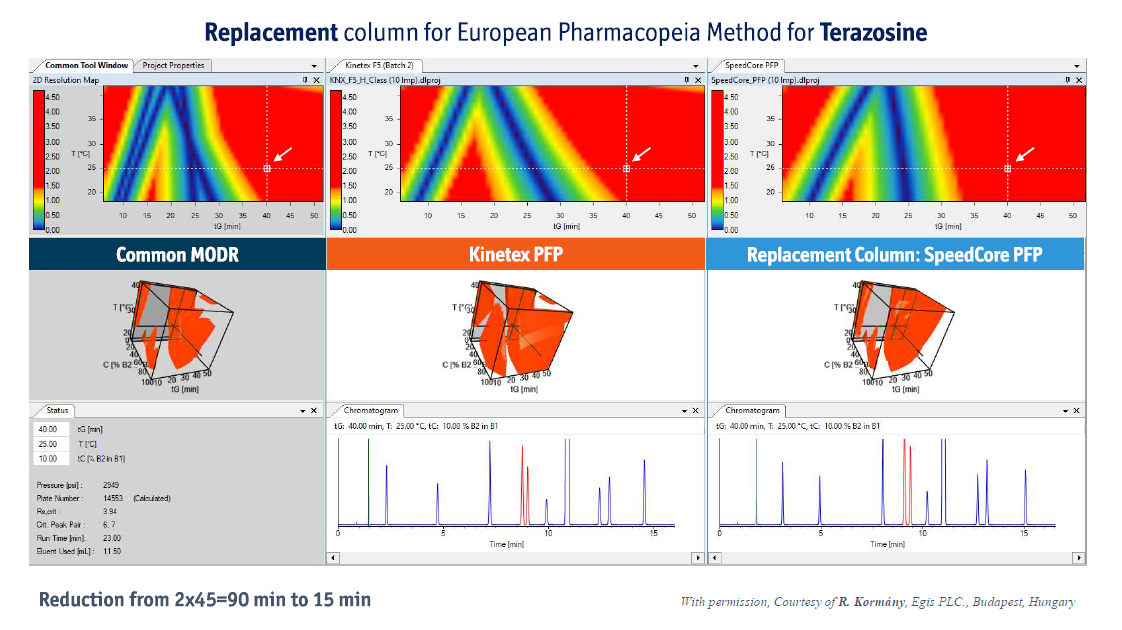