Iskandar will deliver a presentation on ‘Boosting VHH Expression Using UNLOCK PICHIA’ on the morning of Day Three of the conference (Wednesday, 22 January, 9.20 am – 9.50 am) as part of the “Effective Expression and Production of Recombinant Proteins” stream.

He will explain how production strains and processes for the manufacture of single-domain antibodies, also known as VHHs, are currently developed at VALIDOGEN´s labs for an increasing number of different applications. Efficient production of VHHs is enabled by VALIDOGEN’s yield-enhancing UNLOCK PICHIA protein production toolbox, comprising a broad diversity of molecular tools and expression strategies.

“We are able to demonstrate significant enhancement of VHH expression applying our technology platform, for example a set of helper factors acting along the way from transcription to secretion,” said Roland Weis.

VALIDOGEN´s UNLOCK PICHIA protein production toolbox including the company´s library of PAOX1 promoter variants provides several advantages. Very high titers along with timely adjusted expression of helper proteins (some available exclusively through VALIDOGEN) as well as lower consumption or complete absence of methanol are features which can significantly contribute to enhanced productivity and product quality and hence substantial reduction in cost of goods for protein manufacturing.

In an experimental case study, a set of helper factors acting either in the cytosol or the ER or facilitating translocation of nascent proteins into the ER were co-expressed in order to investigate a potential enhancement of VHH-dimer expression. Results from microscale as well as bioreactor scale showed a 2.0 – 2.7-fold improvement of product yield. Combining all three helper factors in one expression construct led to a 3.5-fold enhancement of product yield as depicted in the graph below.

Headquartered in Raaba-Grambach, near Graz, Austria, VALIDOGEN is a private company and independent subsidiary of the KonValue Holding GmbH.

The Protein Science Week known as PepTalk is one of the largest annual gatherings of protein science researchers in the world. PepTalk features renowned speakers from academia, biotech and pharma who bring global expertise and perspective to the forefront.

The event is organized by CHI – Cambridge HealthTech Institute, with further information at: https://www.chi-peptalk.com. 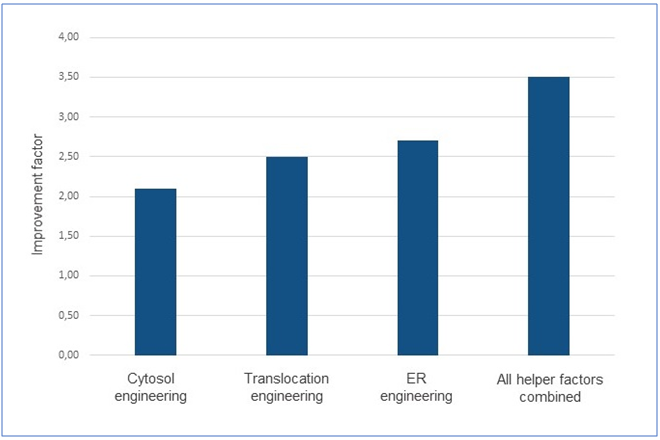 UNLOCK PICHIA allows protein production to profit (among other tools) from an extended portfolio of helper factors acting at multiple sites within the production host. Combining all three helper factors in one expression construct led to a 3.5-fold enhancement of product yield