Lead author was Dr. Szabolcs Fekete, together with his colleague from the School of Pharmaceutical Sciences, University of Geneva (CMU), Dr. Davy Guillarme and Dr. Imre Molnár, founder and CEO of the Molnár-Institute.

The team’s goal was to find a method of calculating the average drug to antibody ratio (DAR) of any ADC product. The average DAR forms one of the most important critical quality attributes (CQA) of an ADC, since it determines the amount of “payload” that can be delivered to a tumor cell, with key implications for both efficacy and safety. A variety of analytical methods have been used to measure the average DAR, including UV–Vis spectroscopic, liquid chromatographic, and native mass spectrometric methods.

The study set out to prove efficacy of a proposed generic RPC-based method development strategy based on optimization of mobile phase temperature, gradient profile and mobile phase ternary composition.

The study succeeded in constructing the first 3D retention model for a large therapeutic protein and achieved fast and efficient separation of brentuximab vedotin as a representative DAR species of a commercial ADC sample.

The predicted retention model was validated as highly reliable, with an average deviation of retention time prediction lower than 0.5%, using 2D or 3D retention models based on up to six and 12 initial experiments respectively.

Crucially, the new 3D retention model successfully applied in RPC for IgG1 cysteine conjugated antibody drug conjugate (ADC) required only two to three working days to optimize the separation for the sample while simplified 2D models could also be constructed for fast method development in less than one day.

The generic (platform) method development approach was found to be feasible with clear time savings in using this systematic methodology, compared to trial and error approaches.

The team determined that the most important method variables to optimize ADC separation were the gradient steepness, mobile phase temperature, and mobile phase ternary composition.

“The developed RPC method can be considered for determining the average DAR of an ADC, based on the observed peak area ratios of the reduced ADC sample. The native ADC separation can also be useful for multidimensional separations in the second dimension to separate the positional isomers and different species and enabling the MS identification,” the study concludes.

“It’s also worth mentioning that – by understanding the retention behavior of ADC peaks – analysis time could be shortened into the 20–25 min range while 60–70 min long separations were reported previously,” the authors add.

The Molnár-Institute is a registered vendor to the US FDA, CDC and many other regulatory bodies. DryLab® has pioneered AQbD long before regulatory agencies across the world encouraged such submissions. Widely implemented by thought leaders, the software contributes substantially to the paradigm shift towards a science- and risk driven perspective on HPLC Quality Control and -Assurance.

Click on [1] Separation of antibody drug conjugate species by RPLC: A generic method development approach to read the whole paper.

Fig.1. Simplified 2D resolution maps of native (A) and reduced (B) ADC based on six initial experiments (tG × tC model).  This experimental design took around 3–4 hours of work to produce maps that suggest that both variable (tG and tC) had huge impacts on the critical resolution, making the model useful for routine applications. 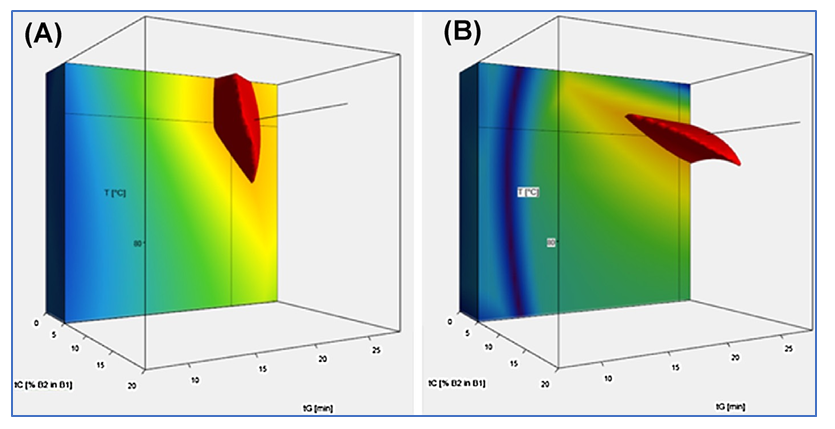 Fig.2. Pioneering 3D resolution maps for Brentuximab vedotin (A) and for Brentuximab vedotin reduced (B) samples, based on the initial experiments (Rs crit = 1.0). Colours represent the value of the critical resolution (Rs), with warm “red” colours corresponding to Rs > 1.0 and cold “blue” colours corresponding to low resolution values (Rs < 0.3). The largest red regions indicate where the method is probably robust and the resolutions of all peaks in the chromatogram are the best that can be achieved, allowing best set point of optimization to be selected.