Liquid Chromatography is a leading technique used in chemical and pharmaceutical industry for the separation and characterization of compounds. In the basic technique we use a liquid (the mobile phase) moving through packed particles (the stationary phase) harnessing differences in ion-exchange, adsorption, Reversed Phase retention, between the various solutes and particles to produce different colored ‘bands’ to reveal composition of the substance under investigation.

What Is Liquid Chromatography?

The term chromatography, derived from the Greek terms ‘chroma’ and ‘grapho’ to literally mean ‘color writing’, was first coined in 1903 by the Russian botanist Mikhail Tswett, who pioneered a column chromatography procedure for separating compounds extracted from plants using a solvent, in a column, packed with chalk particles. As the sample passed through the column, different colored bands could be seen, because some components were moving faster than others. These different-colored bands could then be related to the different compounds, based on each compound’s differing chemical attraction to the particles. This defines the basic liquid chromatography principle.

In 1967 significant advances occurred in liquid chromatography, with pioneering work by Prof. Csaba Horváth at Yale University resulting in development of high pressure liquid chromatography, which he christened  “HPLC”, in which pressures exceeded 1000 psi and were used to ‘push’ liquid through columns, along with improved injectors, detectors, and chromatography columns. As the peak-resolving performance by reducing particle diameter improved accordingly, HPLC was taken to stand for high performance liquid chromatography, which by the end of the 20th century had become the most powerful tool in analytical chemistry, revolutionizing the whole life science area. Applications of column chromatography provide the ability to separate, identify, and quantitate the compounds present in any sample that can be dissolved in a liquid, detecting them in trace concentrations as low as parts per trillion (ppt).

By the early 2000s, liquid chromatography instrumentation and column technology had further advanced with very significant increases in resolution, speed, and sensitivity, using smaller ‘sub-2-micron’ particles and instrumentation able to deliver mobile phase at 15,000 psi (~1,000 bar). This justified a new term: ultra-performance liquid chromatography (UPLC).  Technology, pioneered by the company Waters in Milfors, MA, USA. UPLC has continued to evolve to having chromatography columns containing particles down to 1-2 micron in diameter.

Essential HPLC components include a reservoir to hold the mobile phase, called also as eluent high-pressure pump to generate a precise specified flow rate (typically ca. 0.5 mL/min), a sample manager or autosampler injector to introduce the sample into the mobile phase stream, the column that contains the chromatographic packing material (stationary phase) needed to effect the separation, and a detector to see the separated compound bands as they elute from the HPLC column that are largely invisible to the naked eye.  When the mobile phase contains a separated compound band, HPLC provides the ability to collect this fraction of the eluate containing that purified compound for further studies. If the column diameter is increased to cm’s, the technique is called preparative chromatography.  In addition, extensive IT hardware, chromatographic data software and other intelligent modeling software packages are being used to control the separation process and to build fast and highly representative results.

Twett’s original separations of plant extracts, used a polar stationary phase (chalk in a glass column) with a nonpolar mobile phase such as benzene. Later one introduced stainless-steel columns and silica gel particles. This ‘classic’ mode of chromatography became known as “normal phase”-chromatography (NPC), where the stationary phase is polar and the eluent is nonpolar.

In the 1970’s the silica was modified with alkylsilanes to produce alkyl-silicas, where the polarities were reversed to a polar aqueous mobile phase with a non-polar (hydrophobic) stationary phase.

Because it is more reproducible with wider applicability, Reversed-Phase-Chromatography (RPC) is considered a gold-standard for being accounted for approximately 90 % of all HPLC methods, in particular in pharmaceutical analysis and general in life science. Most of these protocols use as the mobile phase an aqueous blend of water with a miscible, polar organic solvent, such as acetonitrile or methanol. This typically ensures the proper interaction of analytes with the non-polar, hydrophobic particle surface. A C18–bonded silica (sometimes called Octadecylsilica or ODS) has been the most popular type of reversed-phase HPLC packing. The “Theory of RPC” was developed by Horváth, Melander and Molnár in 1975-77 at Yale University and is called the “Solvophobic Theory”.

Rather than visual bands in a packed column, modern liquid chromatography relies on electronic and spectroscopic translation of these bands into peaks, representing the separations that have been chromatographically achieved. These representations are called chromatograms.

Each peak represents the response for a different compound from a detector that could use UV-absorbance, fluorescence, evaporative-light-scattering [ELSD] or one or more techniques in series. It’s also possible to couple a mass spectrometer to an HPLC instrument to form an LC/MS system.

These chromatograms generated and plotted by a computer data station (Chromatographic Data System, CDS), can also be used as input runs for DryLab® chromatography modelling software to generate subsequent 2D or 3D separation models. The acquired in-depth knowledge of these separation models help to optimize important discrete (stationary phase dimensions, HPLC instrument factors like dwell- and extra column-volume) and other, highly influential continuous method parameters such as the amount of organic eluent (%B) or time of gradient (tG), temperature (T), pH, or ternary mixtures of organic modifiers, tC, etc. Hence, modelling tools can be extremely useful to facilitate the HPLC method development process and to save time and resources, and generate sufficient methods having excellent robustness with long-term-stability.

HPLC and UPLC provide analytical data that can be used both to identify and to quantify compounds present in a sample. However, HPLC can also be used to purify and collect desired amounts of each compound, using for instance a fraction collector downstream of the detector flow cell. This process is called preparative chromatography, allowing the chromatographic practitioner to collect individual analytes as they elute from the column and thus isolate compounds at quantities and purity levels needed for further experiments. For pharmaceutical or biotech purification processes, preparative HPLC columns – up to several feet in diameter – can be used for multiple kilograms of material, such as insulin, among others. But for isolating lab scale micrograms of a valuable natural product, a normal analytical HPLC column will also suffice for Preparative Chromatography.

Hydrophilic-Interaction Chromatography or “HILIC” may be viewed as a variant of normal-phase chromatography. In normal-phase chromatography, the starting mobile phase is typically a 100% organic. Adding up to 20 per cent water to an organic mobile phase that typically consists of an aprotic solvent like acetonitrile makes it possible to separate and elute polar compounds that are strongly retained in the normal-phase mode, or weakly retained in RPC. Since water is a very polar solvent, it competes effectively with polar analytes on the stationary phase. Polar compounds, that are initially attracted to the polar packing material can be eluted as the polarity of the mobile phase increases with the addition of more water (or AcN/MeOH) to the eluent. Buffers or salts may also be added to the mobile phase to keep ionizable analytes in fast equilibria resulting in sharp peak forms.

HIC is a type of RPC that is used to separate large biomolecules, such as proteins. It is usually desirable to maintain these molecules intact in an aqueous solution, avoiding contact with organic solvents or surfaces that might denature them. HIC takes advantage of the hydrophobic interaction of large molecules with a moderately hydrophobic stationary phase, such as propyl-, butyl-bonded (C3-C4), rather than octadecyl-bonded (C18)-silica. Initially, higher salt concentrations in water will encourage the proteins to be retained (“salted out”) on the packing. Gradient separations are typically run by decreasing salt concentration, also called “reverse salt gradient”. In this way, biomolecules are eluted in order of increasing hydrophobicity.

For separations based on polarity, “like is attracted to alike” and opposites may be repelled. In ion-exchange chromatography (IEC) and other separations based upon electrical charge, the rule is reversed. In ion exchange, likes are repelled, while opposites are attracted. Stationary phases for ion-exchange separations are characterized by the nature and strength of the acidic or basic functions on their surfaces and the types of ions that they attract and retain. Cation exchange is used to retain and separate positively charged ions on a negatively charged surface. Conversely, anion exchange is used to retain and separate negatively charged ions on a positively charged surface. With each type of ion exchange processes, there are at least two general approaches for separation and elution:

When weak ion exchangers are neutralized, they may retain and separate species by weak hydrophobic forces of reversed-phase or hydrophilic (normal-phase) interactions; in these cases, elution strength is determined by the polarity of the eluent (Figure R-1). Thus, weak ion exchangers may be used for mixed-mode separations (separations based on both polarity and charge) as well.

In elution chromatography, the mobile phase may also be called the eluent, while the word eluate is defined as the portion of the mobile phase that has passed through the sorbent bed and contains the compounds of interest in solution.

The term ‘elute’ is preferred to ‘develop’, since the latter a term used also in planar chromatography. This avoids confusion with the practice of method development, whereby a separation system (the combination of mobile and stationary phases and the partitioning sample components) is optimized for a particular separation. 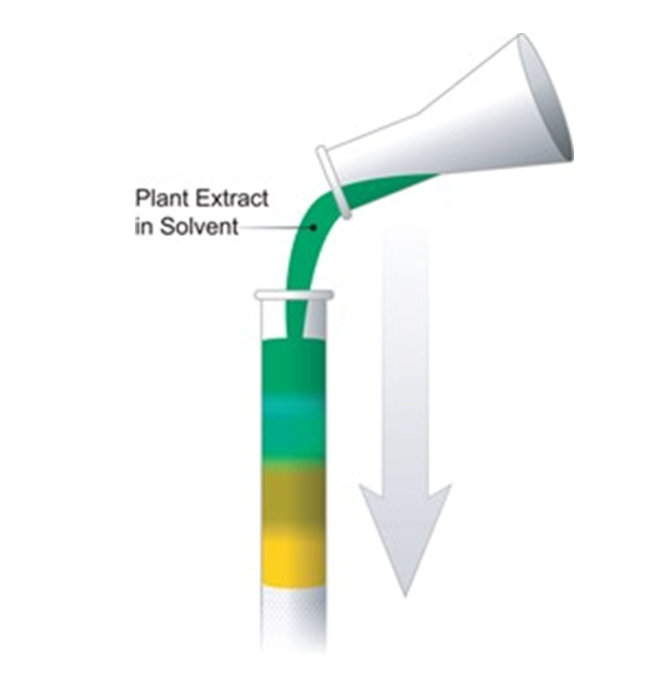 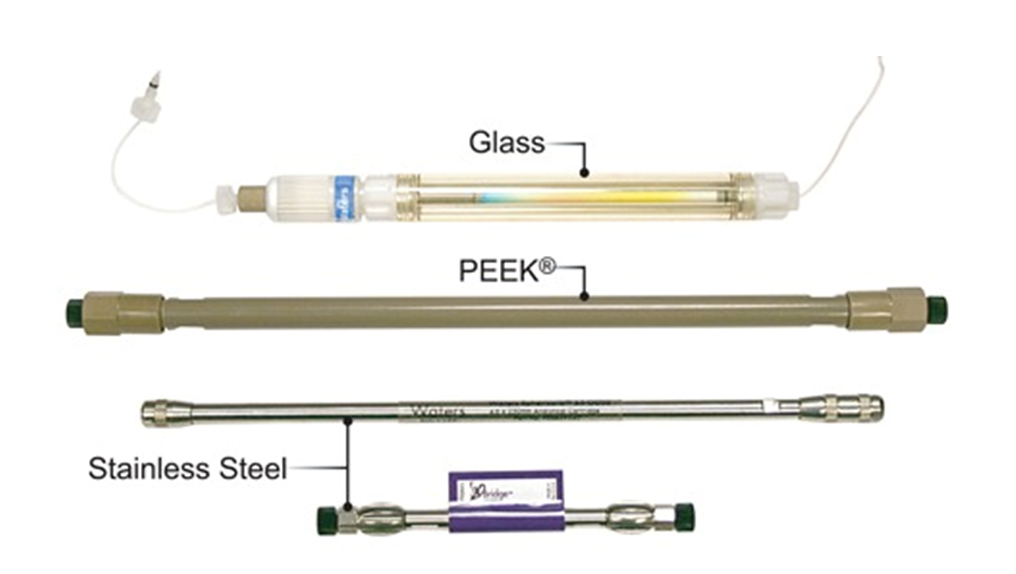 Examples of HPLC Columns: A column tube and fittings must contain the stationary phase chromatographic packing material used to effect separations and must also withstand the high pressures involved. Most columns are constructed of stainless steel for highest pressure resistance, PEEK™ engineered plastic or glass when inert surfaces are required. (Image from Waters Corp). 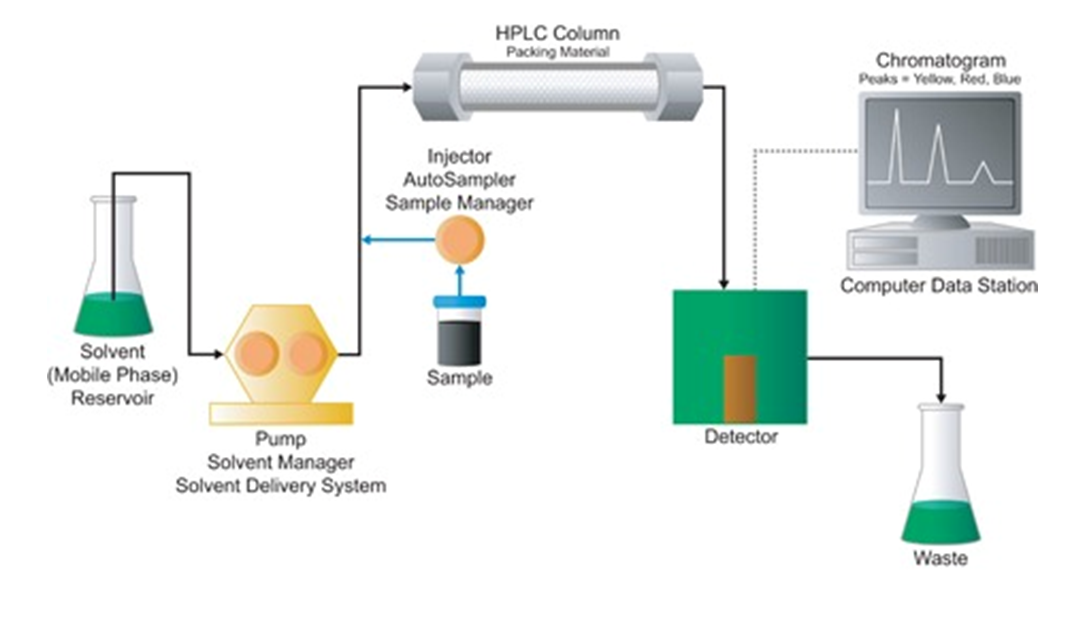 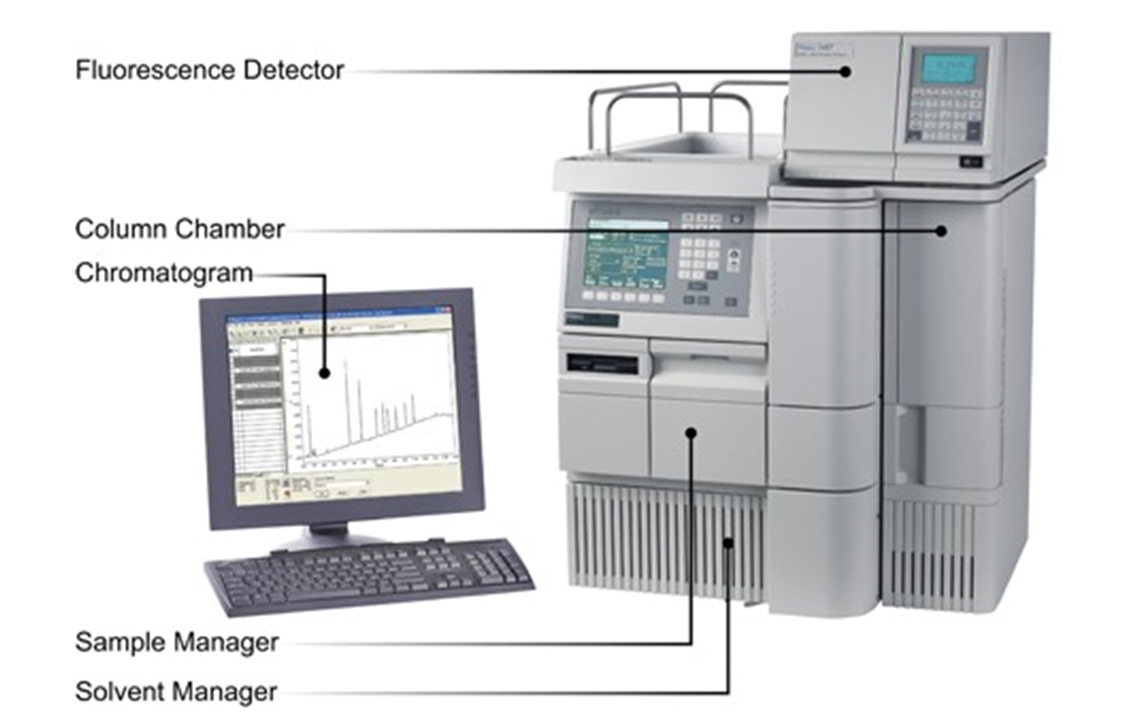 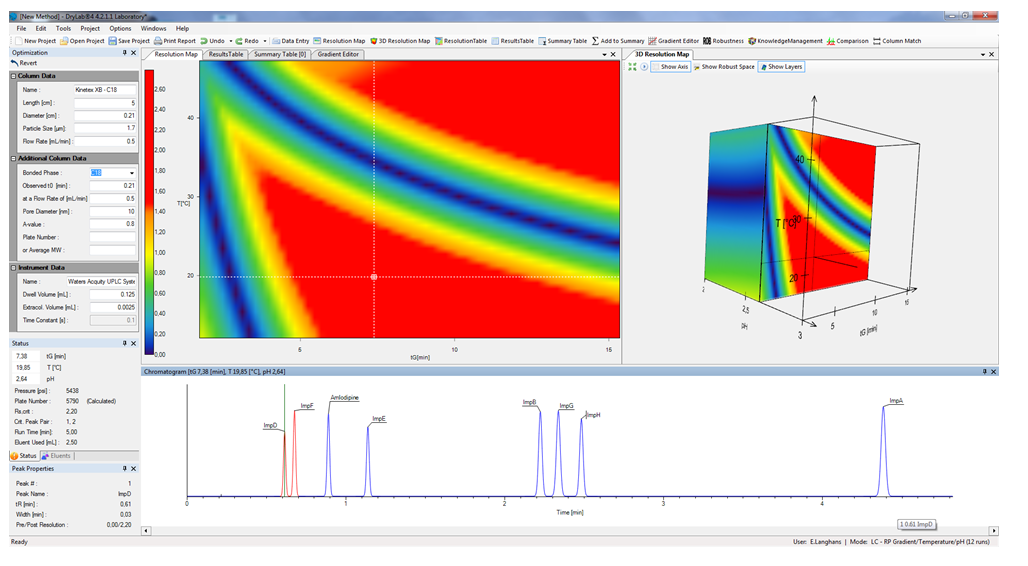 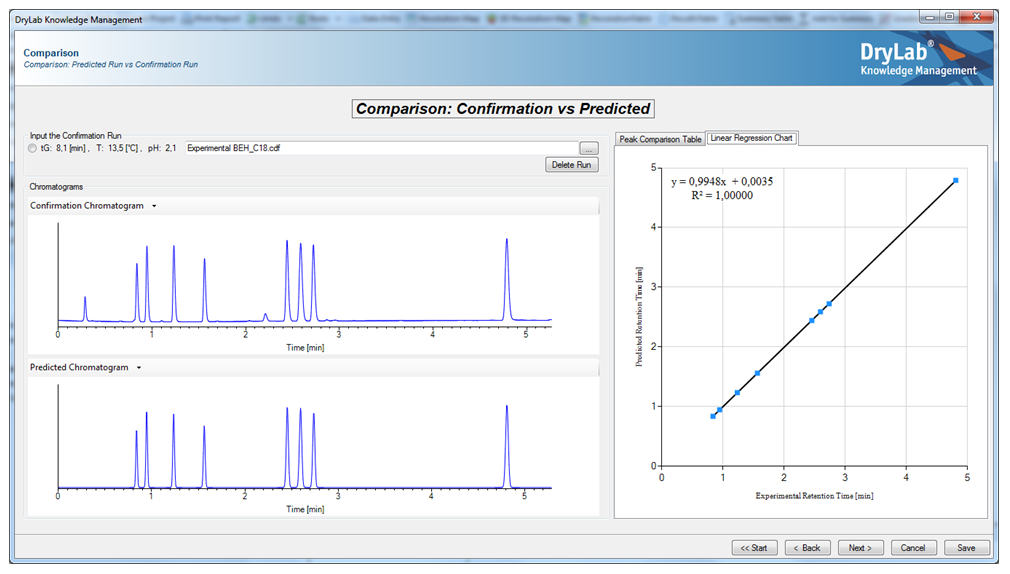