To get in touch with Wet Granulation – MEGGLE Excipients & Technology, simply fill out the form below.

While Direct Compression (DC) is the usual method of tablet manufacture, it may not be appropriate for some active substances, leaving wet granulation as the preferred alternative.

In the traditional wet granulation method, a moistened mass is sieved to produce wet granules that are subsequently dried, with a subsequent screening stage to eliminate agglomerates.

Wet granulation using organic solvents is preferred for water-sensitive drugs, as an alternative to dry granulation, or when rapid drying is required.

The pharmaceutical industry depends on several types of wet granulation equipment , principally fluid bed granulators where air is blown upwards through the powder to agitate and fluidize the particles or mixer granulators that agitate the powder using a large impeller in mixer bowl.

As with dry granulation and DC, wet granulation requires manufacturers to blend APIs with appropriate excipients.

Lactose is among the most frequently used excipients for granulation in pharma applications, offering good compression and blending properties. However, like many other excipients, unmodified lactose may not be suitable for direct compression due to insufficient flowability and compactability. As Figure 1 illustrates, lactose-based excipients meet the needs of wet granulation where compressibility is low but where powder flows are highly variable.

Numerous global and regional pharmaceutical manufacturers have historically relied on MEGGLE milled alpha-lactose monohydrate grades as diluents in dry and wet granulation processes, due to their chemical and physical stability, in oral, parenteral and inhalative pharmaceutical applications, versatile binder-filler properties, and global availability.

During the milling process, finer, sharper-edged particles are formed, having cohesive powder properties that can be beneficial during granulation processes. Clean unlubricated surfaces created during the compaction process as a result of brittle fracture lead to improved compactability.

Alpha-lactose monohydrate and maize starch (corn starch) are functional excipients used in oral solid dosage forms. Both are naturally derived and well established in the pharmaceutical industry. Lactose is frequently used as a diluent or wet granulation binder. Starch can be used as a binder for wet or dry applications, disintegrant, and diluent. In an effort to establish synergistic functional performance, such as enhanced compactability and faster tablet disintegration, lactose and starch were co-spray-dried to form a monoparticulate system. StarLac® comprises 85 % alpha-lactose monohydrate and 15 % native maize starch. StarLac® provides compaction and lubricant insensitivity characteristics desired for wet granulation, along with the hydration properties desired for rapid API release. Additionally, StarLac®’s flowability is superior compared to a physical blend of the individual components in equivalent ratio.

These and other properties, such as excellent compactability, rapid hardness-independent tablet disintegration and compaction and hydration properties independent of hydrophobic lubricant type or level, also make Starlac useful for dry granulation and ODT formulations.

Recently, through a proprietary agglomeration process, MEGGLE has succeeded in producing RetaLac® as a co-processed composition comprising hypromellose and lactose, offering suitable alternatives to overcome these limitations. Possessing enhanced functional performance, the new excipient offers characteristics desired in formulation development and manufacture and may be of significant interest to innovator and generic pharmaceutical companies.

RetaLac® is binary in composition but monoparticulate in structure, having hypromellose and lactose in each particle. It is characterized by superior functional performance such as improved flow and blendability. Additionally, the monoparticulate structure gives RetaLac® both plastic and brittle fracture deformation characteristics, enhancing compactability in DC compared to traditional wet granulated and physical admixtures of the parent ingredients.

API release is controlled predominately by diffusion through the hydrophilic matrix, and is most robust in the range of pH 1 to 7.4. To minimize development time, API dissolution prediction as a function of tablet geometry is possible. This is aided by RetaLac®’s dramatic improvement in wettability compared to HPMC alone or in traditional wet granulations and simple admixtures. 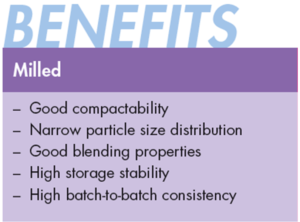