In hydrophilic sustained release systems water uptake can be primordial for the solution of an active pharmaceutical ingredient (API), as well as for the swelling of the tablet matrix impacting greatly its diffusion.

Overcoming the powder technological and production-related deficiencies of frequently used single components by co-processing without compromising the complex API-matrix interaction during water imbibition was the challenge to be solved by RetaLac®.

RetaLac® is beneficial across a broad range of applications including efficient DC of sustained release formulations, DG, or e.g. convenient and rapid preparation of HPMC suspensions.

Dynamic changes in tablet dimensions (swelling) were monitored with a micrometer gauge (Digimatic Micrometer, Mitutoyo, Tokyo, Japan). At predetermined time points samples were withdrawn and their diameter was measured in the wet state.

Under given conditions tablets with drug loadings of 20% Propranolol HCl or more could not be prepared via wet granulation due to granules with extreme hardness and variability in weight approaching the limits of the tableting machine. Finally, all experiments were conducted in triplicate.

Matrix tablets were also exposed to colored aqueous solution to allow their swelling and water uptake characteristics to be captured on video (see Resources). 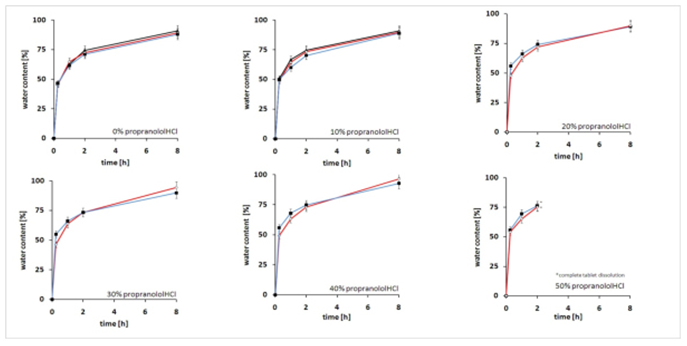 Effects of the type of preparation technique between 0 and 8 hours in release medium 0.1M HCl monitored by the water content of RetaLac®-based tablets (red line) in comparison to other tablet preparation methods as the physical blend (blue line) or the wet granulated form  (black line) upon different concentrations of Propranolol HCl between 0 and 50% drug load. Little difference was observed, indicating similar release system performance. This applied also to phosphate buffer, pH 7.4 (not shown). Initial tablet heights were 2.5mm with a diameter of 11.3mm.

Click on Technical information to see detailed RetaLac® specifications.
Click on Diffusion of a RetaLac® Tablet for video