Bachem offers a wide selection of opioid peptides and opioid research-related products that support advances in studies of addictive and emotional behaviors, the regulation of pain and stress responses and control of food intake.

Endogenous opioid peptides and their receptors from promising therapeutic targets for the management of pain but also offer starting points for the treatment of emotional disorders and addictive diseases.

Opioid receptors are expressed in various tissues and cell types. They are found in central and peripheral neurons, but also in other cell types such as neuroendocrine, immune, and mucosal cells.

The discovery of the classical opioid receptors and the first endogenous opioid peptides, Met- and Leu-enkephalin, dates back to the early 1970s. Subsequent work has led to the identification of further opioid peptides and the cloning of their receptors.

The endogenous opioid peptides are relatively short peptides and include the endorphins, enkephalins, dynorphins, and nociceptin/orphanin FQ. They are mainly produced in the central nervous system (CNS) but also in various glands such as the pituitary gland and the adrenal glands.

The endorphins are cleaved from proopiomelanocortin (POMC) which is also the precursor protein for other peptides such as ACTH, β-lipotropin, α-MSH, β-MSH, and γ-MSH. Met-enkephalin and Leu-enkephalin are produced from the precursor protein proenkephalin A that gives rise to additional peptides including two C-terminal extended forms of Met-enkephalin. Dynorphin A and B as well as α- and β-neoendorphin are derived from prodynorphin (PDYN) also known as proenkephalin B. The heptadecapeptide nociceptin/orphanin FQ is derived from prepronociceptin.

Nano opioid (μ-opioid) receptors represent the primary molecular target for morphine and mediate both the beneficial (analgesia) and adverse effects such as respiratory depression of this drug. They also mediate the rewarding properties of non-opioid drugs such as alcohol, cannabinoids and nicotine. Stimulation of κ-opioid receptors results in dysphoria and other aversive effects such as hallucination. Activation of δ-opioid receptors regulates emotional responses and causes anxiolytic and antidepressant effects. NOP activation has a modulatory role on μ-opioid receptor-mediated actions. NOP receptors are additionally involved in motor control and other central processes.

In contrast to the other opioid peptides, no precursor peptide or gene has been identified for endomorphin-1 and-2 (See Table 1).

All four opioid receptors couple to the inhibitory G proteins (Gαi and Gαo). They convey extracellular signals within the cells by activating the heterotrimeric G proteins, which interact with the cytoplasmic domains of the receptors. Upon activation, the Gα and Gβγ subunits dissociate from one another, allowing them to act upon their downstream effectors and thereby initiate a variety of intracellular signaling responses. These include suppression of adenylate cyclase activity by Gα subunits, thereby reducing cyclic AMP production, and inhibition of voltage-gated calcium channels (VGCC) as well as activation of G protein-gated inwardly rectifying potassium (GIRK) channels by Gβγ subunits.

Receptor activation also results in receptor phosphorylation by G protein-coupled receptor kinases, which increases its affinity for β-arrestin molecules. β-Arrestin molecules are involved in the regulation of G protein signaling through receptor desensitization and internalization. They also act as scaffolds, bringing together other proteins to activate separate signaling pathways including the mitogen-activated protein kinase (MAPK) cascade. Biased opioid receptor ligands stabilize receptor conformations preferentially activating either the G protein or the β-arrestin pathway (Figure 1). The discovery of this type of ligands has opened a new area of drug research, aiming for example, at the design of drugs with less side effects.

There is also evidence that opioid receptors can form heterodimers composed of different opioid receptors, which offers the potential to develop bivalent ligands with unique pharmacological properties.

Exorphins, also known as exogenous opioid peptides, are short food-derived peptides. They can arise during digestion through the enzymatic cleavage of proteins by enzymes such as pepsin, trypsin and chymotrypsin. The most common food sources for these bioactive peptides are milk or dairy products, soybean, cereals, and green vegetables such as spinach. (See Table 3).

The physiological significance of these peptides remains controversial. They have been implicated in autism and schizophrenia and might be involved in emotional behavior and memory processes by influencing hormonal or neurotransmitter systems via opioid receptors.

Opioid peptides are known to play a role in analgesia, feeding, memory, motivation, immune responses and a variety of other functions. Opioid receptors serve as important drug targets and opioid peptide analogs are of interest for the treatment of pain and other conditions such as mood disorders and substance abuse (17). For example, peptide-based analgesics are being explored in the search for safer alternatives to existing opioid drugs because they may produce less tolerance, respiratory suppression, and addiction. There are several promising opioid peptides in clinical development for various indications as shown in Table 4. 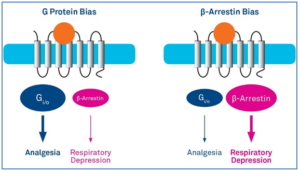 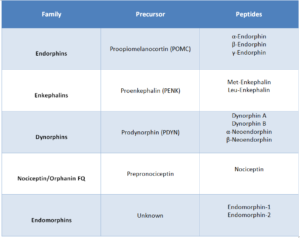 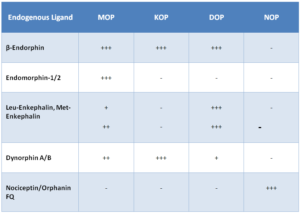 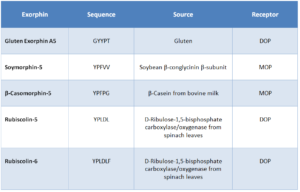 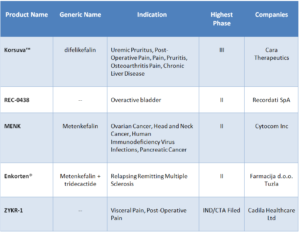