The study ‘Crystal Structure of Linagliptin Hemihydrate Hemiethanolate (C25H28N8O2)2(H2O)(C2H5OH) from 3D Electron Diffraction Data, Rietveld Refinement, and Density Functional Theory Optimization’ has been published in the American Chemical Society journal Crystal Growth and Design as part of a virtual special issue to mark the 50-year anniversary of the Rietveld Refinement Method.

This work was carried out as part of a project to determine the crystal structures of large-volume commercial pharmaceuticals, whose structures are still unknown even if high-quality powder diﬀraction is available in the Powder Diﬀraction File.

The study set out to solve the crystal structure of the potent dipeptidyl peptidase-4 (DPP-4) inhibitor linagliptin hemihydrate hemiethanolate (Linagliptin) that is used with diet and exercise to treat type-2 (non-insulin-dependent) diabetes.

In total, more than 30 linagliptin crystalline polymorphs have been described, together with other stable amorphous forms. Many patent applications related to linagliptin have been issued.

The high quality data obtained allow the recognition of subtle symmetry reductions and of fine differences in the configuration of the two independent molecules that make up the structure. The structure was then further refined using synchrotron X-ray powder diffraction data and optimized using density functional techniques.

The team discovered that the Linagliptin crystal structure is characterized by a zigzag array of molecules in the ab-plane, with a large number of weak hydrogen bonds linking the linagliptin molecules into a framework.

The water and ethanol molecules occupy channels parallel to the c-axis, and form hydrogen bonds to the framework. The two independent linagliptin molecules were found to have different conformations, which are very close in energy.

The current linagliptin hemihydrate hemiethanolate structure is very similar to the known linagliptin water/methanol/ethanol Form I already characterized by Dr. Reddy’s Laboratory. Although the two compounds are similar, they are not the same, so the current structure is a novel one.

NanoMEGAS was founded in 2004 by a team of scientists and experts in the field of electron crystallography and catalysis. Inspired by pioneering work carried out on electron crystallography using  precession electron diffraction at Bristol, UK at 1996 the NanoMEGAS team was first to develop and market its “spinning star” universal precession device for TEM in 2004. Today, there are more than 220 installations worldwide and more than 1500 scientific publications related with NanoMEGAS applications & instrumentation in various fields, including pharmaceuticals. 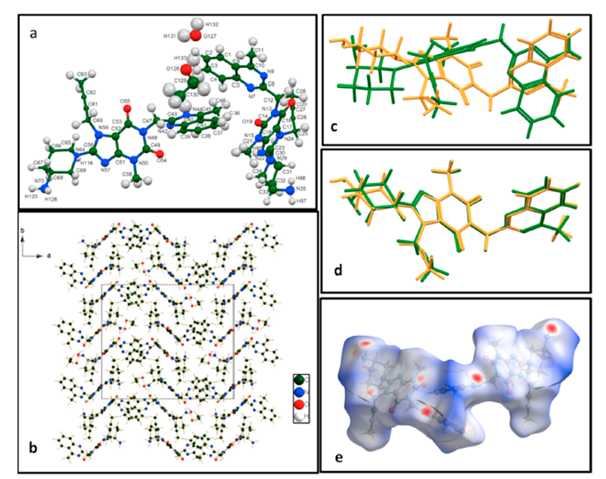