In addition, alpha-lactose monohydrate grades can be tailored to function with differing physical properties for direct compression tableting, sachet or capsule filling.  These characteristics can be determined by bulk density, particle size distribution (PSD) and flowability that are in turn products of the production process: sieved, milled or micronized.

Pharmaceutical lactose plays an important role as tablet binder, carrier and filler and can be used in a wide field of industrial applications like traditional wet and dry granulation (roller compaction), direct compression (DC), or spheronization to form pellets to modify release characteristics.

Lactose may be used in spray-dried forms as filler or pill binder in direct compression (DC) tablet manufacture, being inherently able to form solid compacts under compression.

There is also need for lactose tablets as products in their own right as enzyme supplements for lactose intolerant people who have trouble digesting milk and other dairy products.

Pharma-grade lactose used in tablets plays valuable pharma roles as tablet binders, carriers and fillers and can be used in a wide field of supporting manufacturing applications like traditional wet and dry granulation (roller compaction), or direct compression (DC or DiCom) tableting.

The main targets for lactose monohydrates are still “classical” oral solid dosage forms like tablets or capsules for prescription, OTC medication, or nutritional use, while anhydrous lactose is particularly useful in DC applications, including co-processed tablet excipients for fast disintegration and sustained release.

Additionally, amorphous lactose, a mixture of α-, and ß-anomer, has been revealed as advantageous in introducing plasticity into spray-dried and other lactose grades.

Lactose grades for OSD use 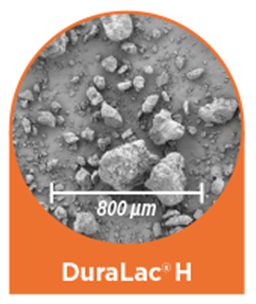