MEGGLE´s Excipients & Technology Department is highly experienced in producing lactose and other powdered ingredients into highly tailored pharmaceutical excipient formulations that aid manufacturing , enhance stability or bioavailability, assist product identification or in other ways enhance overall safety and effectiveness of the product in storage or use.

The wide range of MEGGLE products include co-processed tableting excipients that are innovative, superior products exhibiting unique functional characteristics that cannot be achieved through simple blending and that are ideal for wet and dry granulation processes and direct compression (DC) manufacturing.

Since the implementation of pharmaceutical tablets at the end of the 19th century, flowability and compactibility have been identified as the most important properties of powders in tableting and other direct compression applications.

Most native, mono-component materials are difficult to compress, or simply not transferable into compacts. The situation gets even worse with powder blends, where patient compliance or pharmacological necessities have to be recognized. Dissimilar densities, various morphologies, unequal particle size/size distributions, charge effects or resilience behavior may all initiate a demixing, or ‘segregation’, that can challenge tablet content and mass uniformity.

To retain control, an early wet granulation step was often used to ensure particle flow, beneficial component ratio and overall porosity. But this solution also had limitations, with moisture and heat liable to compromise API stability.

MEGGLE introduced a gentle agglomeration step to convert α-lactose monohydrate monocrystals into particles with superior properties and size distribution. This simple, but effective modification resulted in the Tablettose® family of tablet excipients, with more than half a century of successful applications.

In simply creating larger units, prerequisite flowability could be sufficiently enhanced to be good enough for ordinary, economical die filling, without compromising tablet content and mass uniformity. Consolidation by fractionation of brittle α-lactose monohydrate mono crystals contributes to the formation of adequate interparticle bonds, enabling the formation of strong compacts.

A wide variety of MEGGLE SD-lactose grades, such as FlowLac® 90/100, represent the current standard in multi-functionality of lactose particles at the moment.

This in turn has opened the way to direct compression of tablets as a popular manufacturing choice because it provides the least complex, most cost effective process. Manufacturers can blend APIs with tablet excipients and compress, making dosage forms simple to produce.

Granulation, the reduction of materials to powders of desired granular size and consistency, can be handled in a wet or dry manner: Particles may be either “glued” together using sticky or solving liquids like fluid binders or aqueous/organic solvents (wet granulation). Alternatively, pressure may be applied to increase particle size (dry granulation).

The dry granulation method usually involves use of a roller compactor, or occasionally a heavy duty tablet press, using the slugging approach. Roller compaction has become the preferred technology for it is a semi-continuous process, amenable to process analytical tools, with greater throughput and yields, and with lower absolute running areas needed.

A special case is moisture activated dry granulation (MADG), where only a minimum of liquid binder is used, avoiding interaction with formulation components susceptible to water/solvent.

In classical direct compression (DC) pre-treated tablet excipients ensure sufficient powder flow, formation of compacts, and content uniformity of a blend a priori, so that ideally only one blending step is needed before compaction. Practically, this procedure is of great economical interest for the overall number of working steps is strongly reduced. As a consequence, lower spending is needed on GMP space, labor, maintenance, or validation work.

All granulation platforms are potentially suitable for continuous manufacturing. However, where DC is a dry operation, stability of formulation components is less challenging, and there is less energy consumption, with no need for a drying step. Particles mainly stick together by weak van der Waals forces resulting in a rapid disintegration after administration.

These factors mean that dry granulation methods with direct compression of tablets are particularly suitable for continuous manufacturing, provided that powder flowability can be maintained.

MEGGLE offers five principal brands of co-processed excipients intended for direct compression of tablets. All combine ingredients that are recognized under international pharmacopeias and well-established for use in the pharmaceutical industry.

MicroceLac® 100 uses co-spray drying to combine 75% alpha-lactose monohydrate and 25% microcrystalline cellulose (MC) into a monoparticulate system having brittle fracture and plastic deformation compaction mechanisms, with individual particles that retain their distinctive chemical identities. MicroceLac® 100 maximizes formulation development flexibility, providing the compaction and flow properties desired for DC tableting that may also be applied to other formulation development approaches such as dry granulation and capsule filing.

StarLac® combines 85% alpha-lactose monohydrate and 15% maize starch (corn starch) as functional excipients used in oral solid dosage forms, with lactose and starch co-spray-dried to form a monoparticulate system. StarLac® provides compaction and lubricant insensitivity characteristics desired for DC, and the hydration properties desired for rapid API release. Along with superior flowability, this makes it an ideal co-processed excipient for DC tableting that can also be used across a range of dry granulation formulations.

RetaLac® is the first hypromellose/lactose-based, co-processed excipient specifically designed for DC and dry granulation of modified release formulations. RetaLac® is binary in composition but monoparticulate in structure, having hypromellose and lactose in each particle. It is characterized by superior functional performance such as improved flow and blendability. API release is controlled predominately by diffusion through the hydrophilic matrix, and is most robust in the range of pH 1 to 7.4.  This makes it possible to predict API dissolution as a function of tablet geometry, aided by RetaLac®’s dramatic improvement in wettability compared to hydroxypropyl methylcellulose (HPMC) alone or traditional wet granulation methods and simple admixtures.

MEGGLEs Reta M® is the first hypromellose/mannitol-based, co-processed excipient specifically designed for DC and dry granulation of modified release formulations. Its properties make possible prediction of API dissolution as a function of tablet geometry, significantly speeding tablet  development. This is aided by Reta M®’s dramatic improvement in wettability compared to HPMC alone or in traditional wet granulations and simple admixtures.

Reta M®, appears as a white, or almost white odorless powder, which is freely flowing and partially soluble in cold water. It comprises equal parts of hypromellose (HPMC) with a nominal viscosity of 4000 mPa·s, together with Mannitol. 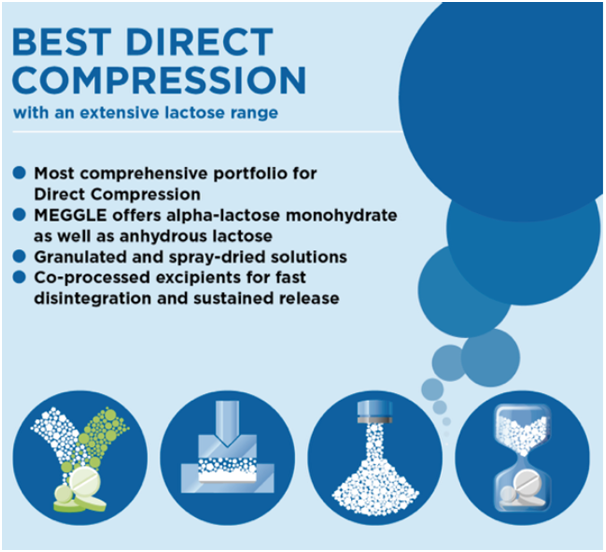 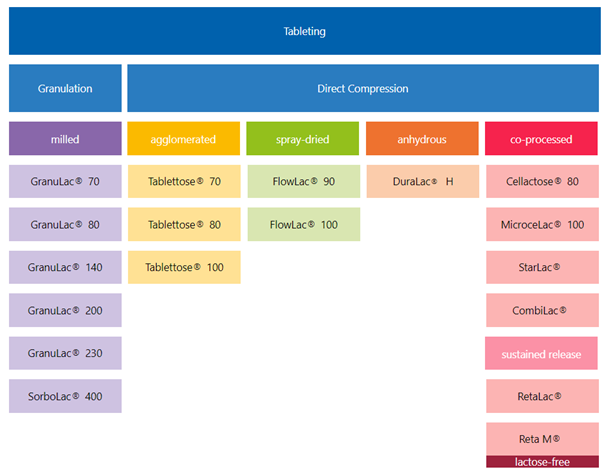