To get in touch with Histone peptides, simply fill out the form below.

The chromosomes of eukaryotes consist of two elements; chromatin, a complex formed by DNA molecules, and proteins called histones. In order to bind efficiently to the negatively charged DNA via electrostatic interactions, histones need to be charged positively. Therefore, these peptides are especially rich in the basic amino acids lysine and arginine. In chromatin, the double helix structure of DNA wraps around a core of histones, with certain areas of the histones protruding from the formed “bead”, the nucleosome.

Acetylated histones do not only play a vital part in the transcription of DNA. Their presence or absence is also associated with human diseases, such as inflammations, addictions and cancer.

There are varieties of different histones, which are represented by different colors within the core of the nucleosome (see illustration).

Chromatin is not a rigid structure, but is rather flexible. If chromatin is in a loose conformation, the chromosomal DNA can be transcribed. Conversely, if chromatin is condensed (creating a complex called heterochromatin), it is inactive, and DNA transcription does not occur. An important factor governing the structure of chromatin is reversible, post-translational modification of histones. Possible modifications are:

Formation of inactive heterochromatin is marked by methylation of a particular lysine residue (K9) on a specific histone (H3). Active chromatin on the other hand is generally associated with methylation of K4 on the same histone as well as acetylation of lysine residues in general. While the activation of chromatin via acetylation is performed by histone acetyltransferase (HAT), its deactivation is facilitated by histone deacetylases (HDACs). Study of histone acetylation is therefore closely linked to the study of these two types of enzymes.

The importance of histones

Acetylated histones do not only play a vital part in the transcription of DNA. Their presence or absence is also associated with human diseases, such as:

Contrary to the modifications with small substituents (i.e. methylation and acetylation), post-translational modifications occur much more rarely with larger molecules such as biotin and ubiquitin, which can be classified as proteins.

Nevertheless, these modifications play an important role for cellular processes. For instance, poly-ubiquitylation commonly flags proteins for degradation, while mono-ubiquitylation of H2A and H2B has been associated with regulation of gene expression.

Histone biotinylation is an especially rare post-translational modification, with less than 0.001% of human histones H3 and H4 being biotinylated in nature. While rare, this modification, too, has significant biological importance.

For instance, fibroblasts of patients suffering from holocarboxylase synthetase deficiency show severely lowered rates of histone biotinylation. There is also evidence that biotinylation is part of the cellular response to DNA damage, since the global biotinylation increases upon formation of thymine dimers in lymphoid cells (caused by UV irradiation). The role of biotinylation in signaling DNA damage is further corroborated by the rapid decrease in biotinylation of Lys12 in H4 upon double-stranded DNA breaks.

Bachem offers various biotinylated histone sequences in its catalog and biotinylation is a standard modification, which can be offered as part of its custom synthesis service.
Due to the importance of histone acetylation for disease research, Bachem not only offers acetylated histone sequences but also HDAC substrates as part of its catalog portfolio. 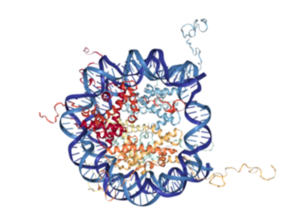 X-Ray Structure of the Nucleosome Core Particle, NCP147, at 1.9 Å Resolution (PDB: 1KX5). Different colors within the core of the nucleosome indicate different varieties of histones