Bachem offers a wide selection of cyclic peptides that play key roles in various processes and have excellent potential as therapeutics.

This is due to several favorable properties such as displaying a large surface area, which leads to high affinity and selectivity for protein targets, and their limited conformational flexibility that reduces the entropic penalty upon binding, which in turn improves their binding properties.

Several cyclic peptides are in advanced phases of clinical development and many others are in earlier phases. Cyclic peptides are an enticing class of molecules as they often exhibit improved bioactivity and in many cases overcome challenges associated with linear peptides such as poor oral availability, membrane permeability and metabolic stability. For researchers and companies engaged in the research and development of cyclic peptides, Bachem offers a comprehensive Custom Synthesis Service and production of New Chemical Entities.

Examples of cyclic peptide drugs include the immunosuppressant cyclosporine A and the hormone oxytocin (Figure 1) whose structures respectively represent examples of the two most common methods of peptide cyclization: amide bond formation and disulfide bond formation. with oxytocin being an example.

Cyclization via amide bond formation is possible between a free amine group and a free acid functionality in the peptide chain. Figure 2 shows three possible ways for this to proceed:

In all three cases, the peptide needs to be in a very specific state of orthogonality or functional group protection. All potentially reactive functional groups need to be protected, except the two, which are intended to form the cyclizing linkage. In the case of amide bond formation, this requires all undesired acid functionalities (e.g. side chains of Glu and Asp) as well as amine functionalities (e.g. side chain of Lys) to be protected. Cyclization is then performed by activating the free acid functionality, which reacts with the free amine moiety.

The situation for disulfide bond formation is similar. If more than two free thiol groups are present upon oxidation, there is a risk, that an undesired disulfide bond connectivity is formed.

An overview on possible levels of orthogonality for amide bond formation is depicted in Table 1.

Table 1: Examples for Different Dimensions of Orthogonality in Fmoc-SPPS. 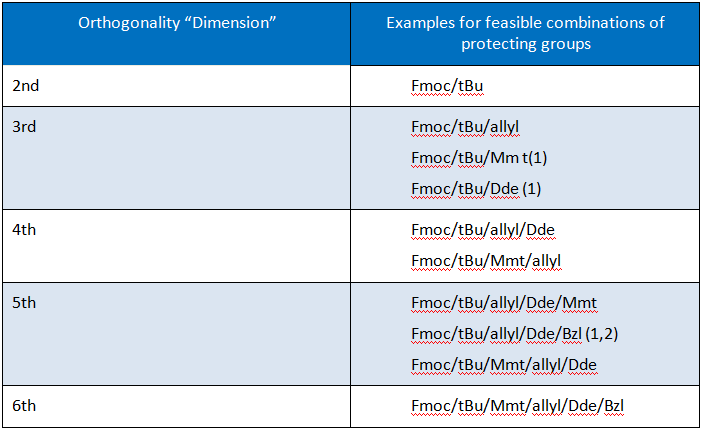 The selective deprotection of cysteine residues is possible as well, allowing for the same type of orthogonality as depicted above.

The cyclization step is a key step in the synthesis of cyclic peptides. The several different strategies for performing it can be grouped into two overall categories – cyclization in solution or cyclization on a solid support (“on resin cyclization”).

Solution phase cyclizations are well-established reactions and work especially well if the conformation of the peptide in solution can be shifted close to the final conformation prior to cyclization, i.e. by incorporating a pseudoproline moiety (Figure 3).

Here, one of the main side reactions of solution phase cyclization is the oligomerization of the peptide chains. To avoid this reactivity, the reaction has to be performed in very dilute conditions, which favor the intramolecular reactivity over the intermolecular one. In larger scale reactions, such high dilutions are generally unfavored due to the large amount of solvent needed and the slow reaction rates.

On-resin cyclizations can generally be performed at higher concentrations, due to the pseudo-dilution effect. This effect occurs, since most of the immobilized peptide chains are not in close proximity and this prevents them from reacting with each other. This allows for cyclization reactions, which can be performed with lower amounts of solvent and in a shorter time. Additionally, on-resin reactions can be performed in synthesizers, which allows for high-throughput screening of sequences, e.g. in the search for new drug candidates.

Other Types of Peptide Cycles

Apart from amide and disulfide bond formation, numerous other methods of peptide cyclization have increasingly become the focus of drug development activities.

Substitution of sulfur in disulfide bonds with other heteroatoms (e.g. selenium) or carbon has been reported, leading to linkages such as Se-Se, CH2-S or CH2-CH2. Different carbon based linkers are also being employed. The so-called stapled peptides can be prepared via transition metal catalyzed ring-closing metathesis from peptides containing unnatural amino acids, such as O-allyl serine or other amino acids bearing terminally unsaturated hydrocarbon chains. Another cyclization method involving unsaturated functionalities are 1,3-dipolar cycloadditions, often referred to as click chemistry.

Peptides containing an aliphatic azide and an alkyne functionality can be cyclized in a Copper-Catalyzed Azide-Alkyne Cycloaddition (CuAAC) under benign reaction conditions. Linkage over ester functionalities is also possible, leading to depsipeptides.

Cyclic peptides hold a plethora of possibilities for drug discovery. Bachem offers numerous cyclic peptides as part of its catalog, including:

Bachem also offers cyclization of peptides as part of its custom synthesis service and in the development of new chemical entities (NCEs).

Naturally occurring cyclic peptides continue to be an inspiration for peptide drug design due to their resistance to enzyme degradation and enhanced protein binding affinity. Cyclic peptides often have better biological activity compared to linear peptides due to conformational rigidity. In recent years, this class of molecules has been propelled forward by the development of new methods to improve the drug-like properties of peptides by constraining their structure and the creation of new platforms to screen large libraries of cyclic molecules . In 2018, the Australian Regulatory Agency approved Aplidin® (plitidepsin), a synthetic cyclic depsipeptide originally of marine origin, for the treatment of multiple myeloma.

Several other cyclic peptides are currently in clinical development for a variety of indications as tabulated below:

Table 2: Selection of Cyclic Peptides in Phase I to Phase III Clinical Development 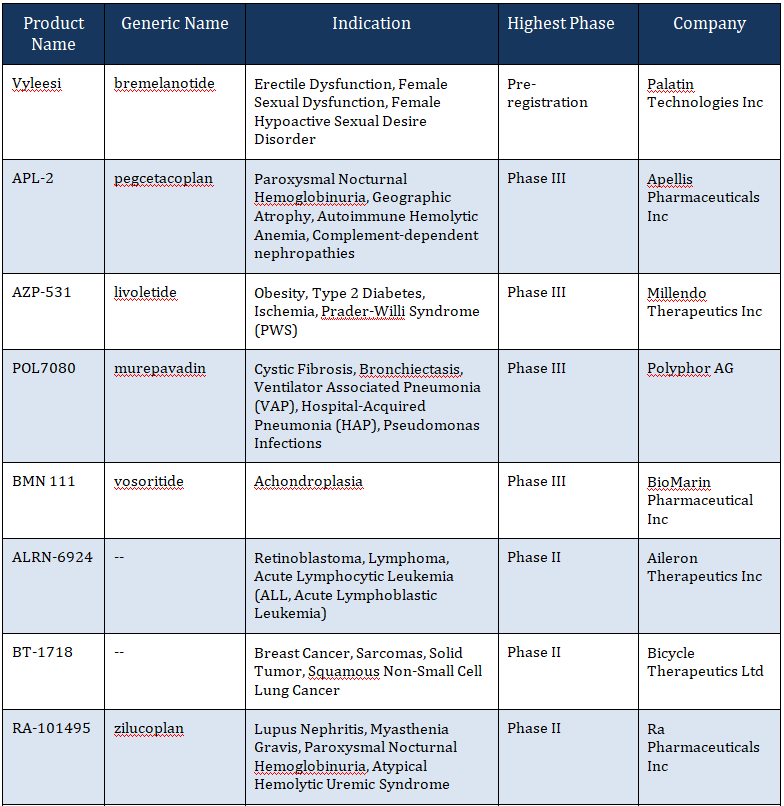 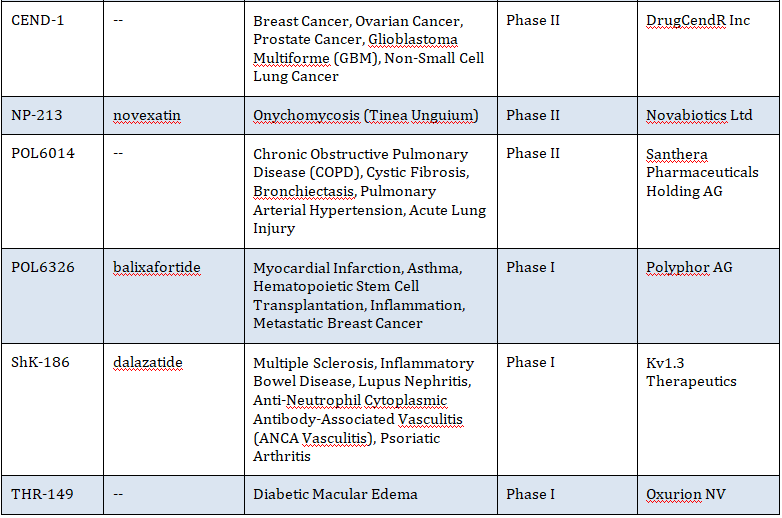 Figure 1: Structures of Oxytocin (left) and Cyclosporine A (right)