To get in touch with Bachem research focuses on GLP-1 treatment for diabetes, simply fill out the form below.

Both authors worked for American Peptide Company, which was acquired by Bachem in early 2015.

They identify GLP-1 as particularly potent in addressing the low blood sugar levels (hypoglycemia) and weight gain that form the most serious obstacles in the way of long term application of intensive therapies for type 2 diabetes.

“Currently available drugs act to increase insulin availability through administration, secretion or by increasing sensitivity. Others act by delaying the delivery and absorption of carbohydrate from the gastrointestinal tract, or by increasing urinary glucose excretion,” say the authors.

“There still seems to be an unmet need in this therapeutic area, in spite of these drugs on the market,” they observe, pointing to recent advances in type 2 diabetes management in the clinical development of DPP-4 inhibitors and in GLP-1 receptor agonists.1

Their study is based on the known mechanism of type 2 diabetes in which oral glucose stimulates the release of the endogenous incretins of GLP-1 and glucose-dependent insulin-releasing polypeptide (GIP). These stimulate insulin release and inhibit glucagon release resulting in lower blood glucose.
However, recent research has indicated that the GLP-1 incretins and GIP are rapidly inactivated by DPP-4, even before leaving the gut.2

“There are several therapies for the management of type 2 diabetes, but still optimal glycemic control is not achieved in spite of advances in options for the treatment of diabetes. A large number of patients fail to attain the glycemic target and only few drugs have shown to effectively control the Hb1Ac numbers below 7%,” say Drs. Gangakhedkar and Thundimadathil.

“The biggest hurdles for the implementation and long term application of intensive therapies are the low blood sugar levels (hypoglycemia) and weight gain. Currently available drugs act to increase insulin availability through administration, secretion or by increasing sensitivity. Others act by delaying the delivery and absorption of carbohydrate from the gastrointestinal tract, or by increasing urinary glucose excretion. There still seems to be an unmet need in this therapeutic area,” they continue.

They highlight the role of GLP-1 in enhancing release of insulin from pancreatic beta cells while also increasing the volume of the these cells and regulating the release of the hormone glucagon, which is known to play an important role in initiating and maintaining hyperglycemic conditions in diabetes and to suppress the plasma glucagon level.3

Further, GLP-1 acts on appetite centers in the brain, slowing the emptying process in stomach and decreasing hunger pangs between meals.4

“Glucagon is a key hormone in glucose metabolism and homeostasis. It regulates blood glucose by decreasing glycolysis and increases the rate of gluconeogenesis. It counter-regulates the hormone of insulin by raising plasma glucose levels in response to insulin-induced hypoglycemia. Glucagon is known to play an important role in initiating and maintaining hyperglycemic conditions in diabetes and to suppress the plasma glucagon level. 3

“It is assumed that GLP-1 may be involved in the stimulation of glucose disposal in peripheral tissues independent of insulin actions,” the researchers note.

They conclude that GLP-1, with its multiple sites of action, is highly influential in combating Type 2 diabetes. Weight loss contributes in increasing the GLP-1 levels leading to improved glucose control in Type-2 Diabetes. Lower levels of GLP-1 in the body lead to obesity, feeling of hunger and empty stomach making the individual eat more.

The article points to significant shortcomings in the currently available drugs that mimic the GLP-1 targeting control of glucose level. These include exenatide (exendin-4), which enhances insulin production and has 53% sequence identity to GLP-1 but has a half life of only 2.4 hours and must be taken twice a day with other anti-diabetic drugs, typically metformin or sulfonylurea. Another leading drug, liraglutide, is an analog with 97% sequence similarity to GLP-1, which is significantly more effective than exenatide in controlling the glycemic index but shows increased frequency of hypoglycemia when combined with metformin and sulfonylurea.

The authors note that GLP-1 reduces the brain glucose concentration in hypoglycemia and also acts to increase net blood brain clearance and brain metabolism, but it is not known whether these effects depend on prevailing plasma glucose (PG).5

Drs. Gangakhedkar and Thundimadathil point out that GLP-1 peptide is a post- translational product of preglucagon which is a precursor of many glucagon related peptides.

More significant still, there are two equipotent forms of GLP-1. One is GLP-1 (7-37) and the other is the more abundant GLP-1 (7-36)-NH2, both of which bind to and activate the GLP-1 receptor (GLP-1R ) that is found in many organs like kidney, GI tract and brain, but is especially highly expressed in the pancreas.

“In summary it is projected that GLP-1 agonist peptides against type-2 diabetes are promising targets for patients with poor Hb1Ac control,” the authors conclude.

The Bachem Group is the world’s only full service provider of peptides and provides a full range of other services to the pharma and biotech industries.

Under its banner Pioneering Partner for Peptides, Bachem specializes in the development of innovative, efficient manufacturing processes and the reliable production of peptide-based active pharmaceutical ingredients (APIs). A comprehensive catalog of biochemicals and exclusive custom syntheses for research labs complete its service portfolio.

Headquartered in Switzerland with subsidiaries in Germany, the UK, and the USA, the group specializes in process development and the manufacture of peptides and complex organic molecules as APIs as well as innovative biochemicals for research.

Bachem prioritizes continuous investment in R&D on chemistries and technologies as crucial for future success. Its ever-increasing knowledge of complex proteins and peptides derives from ongoing research in proteomics, as well as progress in mass spectrometry, synthesis and ligation technologies, complemented by collaboration with external research institutions.

Bachem has six production sites in the U.S. and in Europe along with research level production and full cGMP manufacturing facilities on both continents. These provide capacity to produce APIs, key intermediates, small molecule generics, new chemical entities (NCEs) and finished dosage forms at preclinical, clinical and production scales.

GLP-1 and GLP-2 have multiple sites of action, stimulating intestinal growth and the gastrointestinal tract, as well as acting within the liver, stomach, pancreas and brain, where lowered GLP-1 levels of GLP-1 lead to feelings of hunger. (Image courtesy: American Diabetes Association and Dr. John. Buse, Clinical Diabetes, 23(2)) 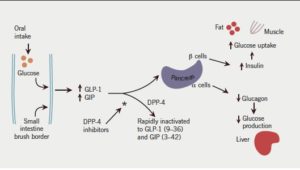