Bachem produces one of the world’s widest ranges of commercially available synthetic peptides and many customers are interested in the processes by which peptides are actually produced.

In this article, Bachem scientists explain the basic procedures and technologies involved.

Peptides can be found in nature and can perform biological functions such as acting as messengers in the body. Therefore, peptides are very useful molecules for many applications from therapeutics to cosmetics and diagnostics.

A peptide is a chain of amino acids that are used as building blocks. More commonly, peptides are short proteins with varying lengths from 2 amino acids to 100 amino acids. Peptides are explained more fully in a further Bachem article  What are peptides?.

How peptides are made

Chemical synthesis is the most used method to produce a peptide molecule, for at least three reasons:

Chemical synthesis is also a convenient method to ‘pimp’ (fine tune) peptides to provide better biological activity. In that regard, synthetic routes open ways to increase the activity of the peptide, to optimize its stability “not better, but longer”. Chemical synthesis also offers more possible modifications to minimize side effects or to obtain peptides that do not occur in nature.

The basic reaction in peptide synthesis relies on a coupling between two amino acids that react with each other to form a dipeptide, with the separation of water. This does not happen spontaneously, so they have to be activated for the reaction to occur. For this purpose, “coupling reagents” have been developed. They generate more reactive derivatives of the amino acids and remove the water which is formed concomitantly from the system.

Figure 1 shows an example of the synthesis of a dipeptide from two different amino acids: L-Alanyl-L-phenylalanine (H-Ala-Phe-OH).

However, addition of a coupling reagent to the solution of alanine and phenylalanine results in a mixture of four possible dipeptides, also making it possible for tri- and longer peptides can be produced as well. (Figure 2).

Assuming H-Ala-Phe-OH is the desired dipeptide and not a mixture, two protecting groups are needed. They must not be split off under the conditions of the coupling reaction, but be readily cleaved in a separate step after coupling has taken place.

Finally, the protecting groups can be removed (X-Ala-Phe-OY → H-Ala-Phe-OH) with X and Y removed under the same conditions.

X is called a temporary protecting group because it is only used for the coupling step. Y is a permanent protecting group that must be stable enough to endure all the coupling and X-cleavage steps. However, it must be removable in the final step, without damaging the peptide. X and Y have to be selected so that X is removed under conditions in which OY is retained. In this way, longer peptides can be synthesized, which can be stretched to any length (Figure 3).

A peptide always has two different groups at each end, and thereby a “direction”. The amino group at the end of a peptide is known as the N-terminus, the carboxyl group at the other end, the C-terminus. In chemical synthesis, the peptide is constructed from the C-terminus in the direction of the N-terminus, and therefore the terminal carboxyl group must be protected throughout the entire synthesis. Irrespective of the method of notation, when representing a peptide sequence, one starts at the N-terminus.

At Bachem, the main protecting groups used for the α-amine (Nα) of amino acids are Fmoc (9-Fluorenylmethoxycarbonly), Boc (t-Butoxycarbonyl), and Z (Benzyloxycarbonyl). Each of them will define the overall strategy of peptide synthesis and therefore, the deprotection and cleavage conditions will change accordingly. Fmoc will be deprotected in basic condition with a piperidine washing, whereas Boc will require acidic condition like a trifluoroacetic washing. Z will be deprotected by catalytic hydrogenation on palladium.

Many Boc or Z-amino acid derivatives are available as DCHA or CHA salts ((Di)cyclohexyl-ammonium salts). Salt formation improves the stability of the storage and handling of acid-sensitive derivatives. Indeed, solid products are much easier to handle than oils, e.g. when weighing.

Benzyloxycarbonyl (Z or Cbz) is the oldest usable Nα-protecting group for amino acids (M. Bergmann & L. Zervas 1932) with development of Z (in honor of Leonidas Zervas) marking the start of modern peptide synthesis. The Z group is often still used today to protect the amino group, also in organic synthesis.

In contrast to the α-amino group, the terminal acid group must be protected throughout the entire synthesis, with a panel of commonly used protecting groups and their deprotection conditions (Table 1).

In addition to N and C-terminus of the amino acids, the side chain should be protected to avoid any side-reaction on this position during the coupling reaction. Presence of a reactive group on the side chain (e.g., the amino acid Lysine, which can react during the coupling step) can lead to the formation of undesired ramifications and by-products. More detail on side-chain protection can be found in the Bachem brochure Peptides.

The choice of amino and carboxyl protecting groups depends on the method and the strategy of synthesis, with the two most important standard methods being solid-phase peptide synthesis (SPPS) and solution (or solution-phase) synthesis. Table 2 summarizes the similarities and differences between the two methods.

SPPS is the core expertise of Bachem for peptides manufacturing for more than 50 years. Most peptides sold by Bachem or manufactured as contract synthesis, are produced by SPPS. Solution synthesis is still chosen for the synthesis of some of our peptide generics, for very short peptides (e.g. dipeptides), and peptides modified at the C-terminus. The essential advantages of the solid-phase synthesis over the solution synthesis are its rapidity and ease of automation, with the process basically consisting of four repetitive steps: Cleavage of protecting croup, washing, coupling of subsequent amino acid, rewashing, ad infinitum.

Automation is possible because the peptide is constructed in steps from the C-terminus to the N-terminus. Amino acids are coupled to each other in sequence, with washing between each step.

However, it is often said that the larger the batch, the slower the SPPS process, because of the increase in “manual work” increases. Whereas small and medium quantities of peptides can be manufactured in fully automated machines, very large quantities (several kg of raw peptide) can only be produced semi-automatically, with only the washing program fully automated.

Bachem is a leading, innovation-driven company specializing in the development and manufacture of peptides and oligonucleotides. For five decades, it has been an innovator in this field with world-class expertise in solid-phase synthesis as well as cleavage and deprotection chemistry. Bachem’s well-developed downstream processes and analytical capabilities allow the company to provide products from development to large-scale GMP and commercialization. Bachem constantly strives for best technology, cost leadership, business excellence, and to provide its customers with the highest quality products and services. 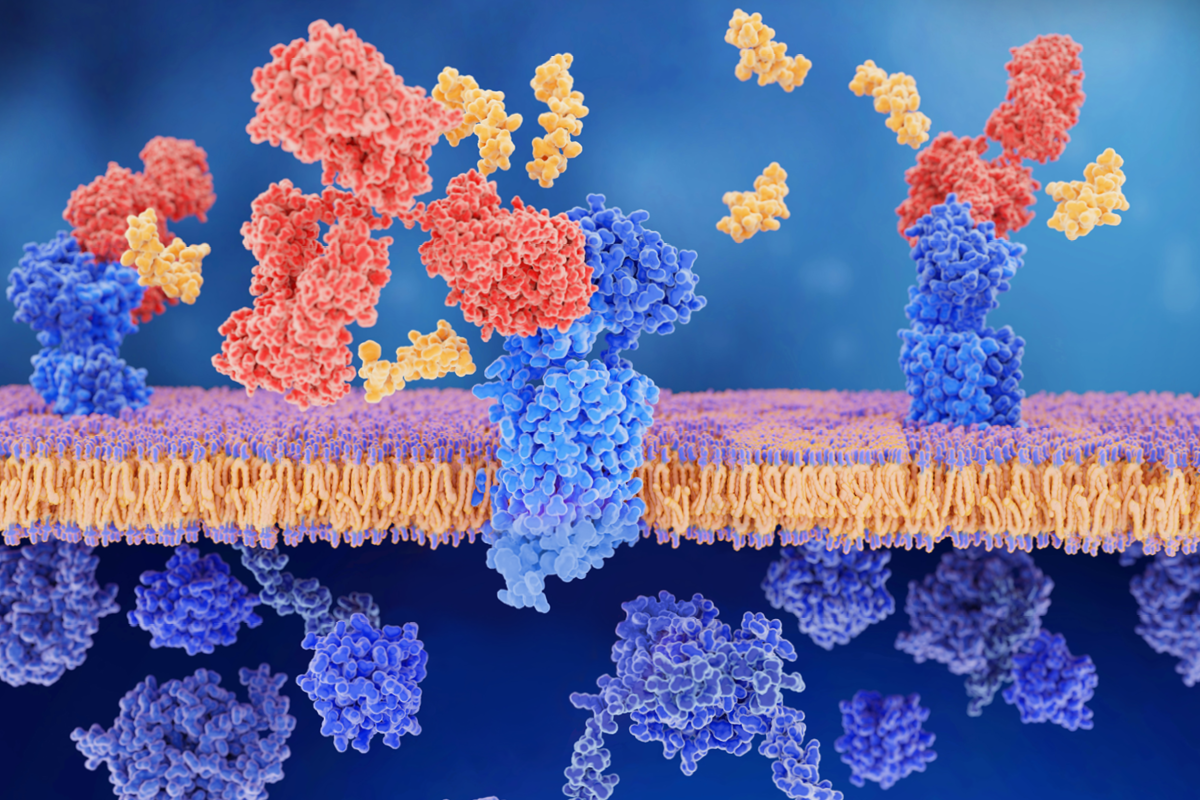 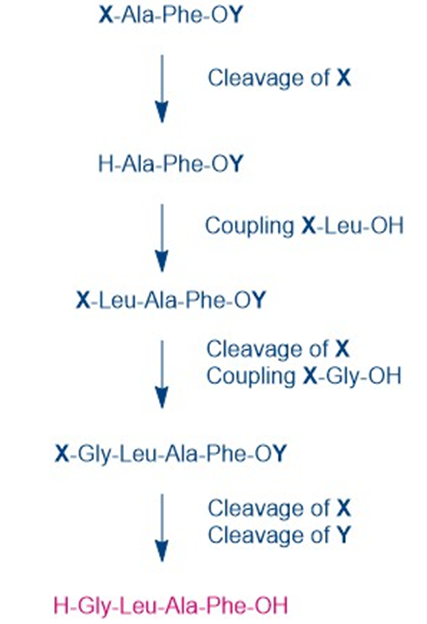 Figure 3: Selective cleavage and coupling of protecting groups allows peptide chains to be produced that can be stretched to any length. 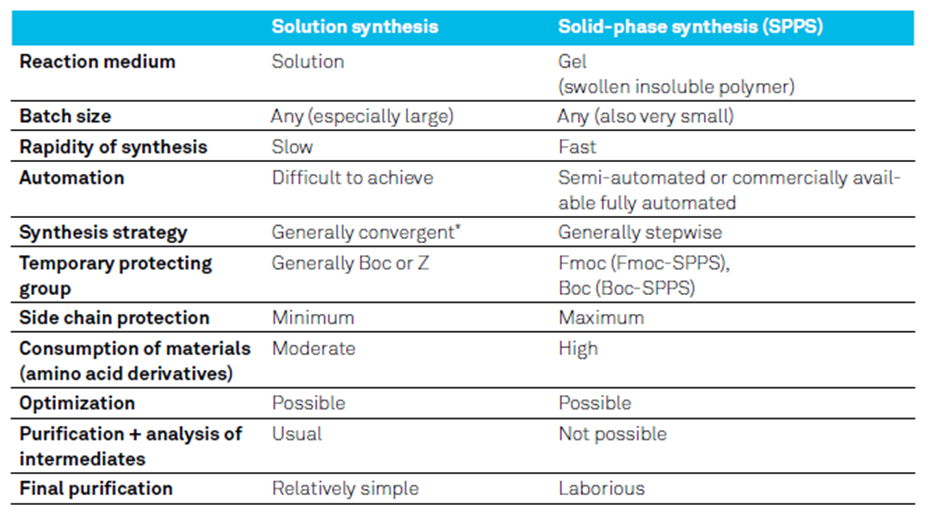 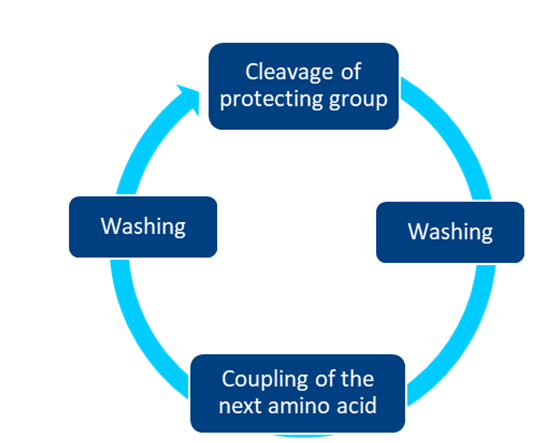 The four basic steps of the SPPS peptide synthesis process.