Bachem offers a selection of Glucagon and Glucagon-Like Peptides for research, as well as Glucagon as a generic active pharmaceutical ingredient (API).

Glucagon plays a role in maintaining a normal concentration of glucose in the blood and it counteracts the effect of insulin in glucose metabolism regulation.

Novel formulations of glucagon and glucagon analogs offer promise for people with diabetes, congenital hyperinsulinism and other related diseases.

The effects of glucagon

Glucagon, named for its “glucose agonist” effect, is a linear peptide secreted by pancreatic α cells. This peptide hormone was first identified in 1923 when a component in pancreatic extracts was found to induce hyperglycemia.

Glucagon is a 29 amino acid peptide structurally related to the secretin family of peptide hormones. Its sequence, synthesized as proglucagon, is highly conserved across mammalian species and is proteolytically processed into glucagon by prohormone convertase 2 (PC2) within the α cells of the pancreatic islets. Proglucagon is also expressed in the intestinal tract. In the intestinal enteroendocrine cells (L-cells), prohormone convertase 1/3 (PC1/3) is greater than PC2 action so the proglucagon sequence is cleaved to yield GLP-1, GLP-2, oxyntomodulin, glicentin and IP2 (Figure 2). There is evidence that PC1/3 is also expressed in the α cells of the pancreatic islets but at lower levels than PC2 suggesting that there is some pancreatic islet production of GLP-12.

Figure 1 illustrates how glucagon prevents blood glucose from dropping to dangerous levels by stimulating the conversion of glycogen to glucose in the liver in a process called glycogenolysis. In addition, glucagon inhibits glucose consumption by the liver so that more glucose is able to enter the bloodstream.

The glucagon receptor (GCGR) sequence is also highly conserved across mammalian species. Binding of glucagon to GCGR activates adenylyl cyclase through G proteins of the Gs subtype which then generates cAMP and leads to activation of PKA. The largest amount of glucagon binding takes place in the liver and kidney. Consequently, the liver and kidney are involved in glucagon clearance from the circulation. Binding also occurs in the heart, adipose tissue, the CNS, adrenal gland and spleen2.

Despite advances in the treatment of type 1 diabetes such as continuous subcutaneous insulin infusion, continuous glucose monitoring, fast-acting insulin analogs and other treatments, hypoglycemia is a common and potentially life-threatening complication of insulin therapy in people with diabetes1.

Injectable glucagon is an approved treatment for severe hypoglycemia episodes. Glucagon is unstable in a liquid so it is available as a lyophilized powder that requires reconstitution by a caregiver before use. Marketed injectable glucagon products include Novo Nordisk’s GlucaGen® Hypokit and Eli Lilly’s Glucagon Emergency Kit3.

Glucagon is unstable in aqueous solution so most commercially available products contain lyophilized glucagon that requires reconstitution prior to injection. However, the recent U.S. Food and Drug Administration (FDA) approval of Eli Lilly’s Baqsimi™ (glucagon nasal powder), provides a more convenient needle-free option for treating severe hypoglycemia. Other innovate glucagon product candidates are in clinical development along with a glucagon analog as shown in Table 1.

Table 1 Glucagon Product Candidates in Phase I to Pre-registration

Xeris Pharmaceuticals is developing the Gvoke™ HypoPen for the treatment of hypoglycemia, hypoglycemia-associated autonomic failure and hyperinsulinemia. Gvoke is a room-temperature stable non-aqueous glucagon solution. In 2018, Xeris submitted a New Drug Application (NDA) to the FDA for their glucagon product candidate for the treatment of hypoglycemia in type 1 diabetes patients. In June 2019, the company announced that the FDA extended the Prescription Drug User Fee Act (PDUFA) goal date for its review of the Gvoke NDA to September 10, 2019.

Zealand Pharma’s Dasiglucagon (ZP-4207) is a glucagon analog under development for treatment of hypoglycemia, type 1 diabetes with an artificial pancreas system and congenital hyperinsulinemia. Dasiglucagon is administered intravenously, intramuscularly and subcutaneously as a liquid formulation. The company is planning to file an NDA during the second half of 2019 for dasiglucagon in the treatment of severe hypoglycemia7.

Adocia is developing a stable ready-to-use glucagon for the treatment of hypoglycemia. The company’s glucagon drug candidate utilizes the Biochaperone technology, a group of polysaccharides designed to form a reversible molecular complex in order to solubilize and stabilize protein therapeutics. The company is planning a Phase I/II study of BioChaperone Glucagon for initiation in 2019.

Innovative and needle-free forms of glucagon are desired to overcome the limitations associated with parenteral glucagon and are potential game-changers in the treatment of severe hypoglycemia. For researchers and organizations working in this field, Bachem offers a selection of Glucagon research peptides, a comprehensive custom peptide synthesis service, a selection of Generic Active Pharmaceutical Ingredients including Glucagon and the production of New Chemical Entities. 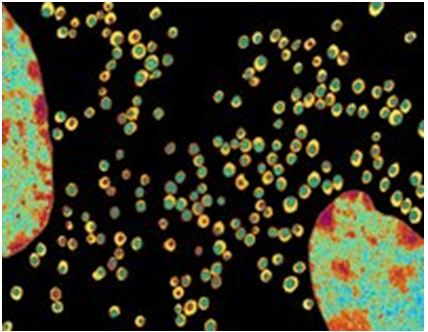 Colored transmission electron micrograph (TEM) of a section through two cells of the hormone-secreting islet of Langerhans in the pancreas (the membrane separating the two cells is not seen). At far left and lower right are parts of the nuclei of these cells. The cells contain membrane-bound secretory granules (circular). These contain a dense granular core of hormone (green) separated from the surrounding membrane by a clear space (yellow). The islets of Langerhans secrete insulin and glucagon hormones into the blood, which control blood sugar levels. 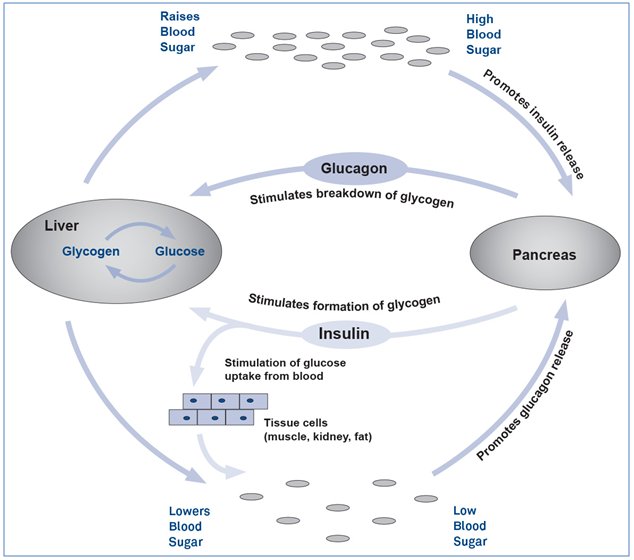 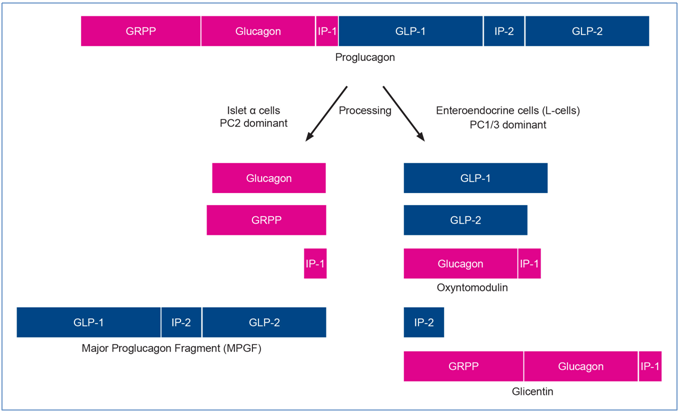