Phage Consultants (PC) provides some of the world’s most comprehensive services to detect bacteriophage (phage) and prophage presence across a wide spectrum of bacterial hosts.

As a specialist laboratory and world expert on phages, able to access the complete array of bacteriophages, PC is particularly well placed to execute phage typing – using bacteriophages to identify bacterial strains and trace the source of outbreaks of bacterial infections or contaminations.

What is phage typing?

When seeking a meaningful definition of phage typing, it should be understood that bacteriophages use two mechanisms, lytic or lysogenic. In the first one, the phage injects its genome into the cell, turning it into a breeding ground for further phages and destroying the host. In lysogenic action, the phage’s injected genome is incorporated into the cell’s DNA, turning it into a prophage that will produce progeny when reproduction conditions are favorable.

Moreover, these bacterial viruses are highly specific, with some phages only able to infect a single strain of bacteria.

Therefore, if a lawn of investigated bacteria is divided into a grid with each zone seeded from a panel of different type of lytic phages, observation of which of the regions of the panel exhibit clear zones will reveal the identity of the bacterial strain. This phage specificity (which groups of phages can lyse or fail to lyse a bacterial strain) can be used to classify the bacteria by phage-type, a number prefixed DT or PT.

Microbiologists use phage typing to determine the relatedness of bacterial species. In particular, phage typing provides a rapid and low-cost approach for the epidemiological surveillance and identification of the source of infection in outbreak investigations.

Bacteriophage testing has long formed the golden standard method for surveillance of Salmonella Typhimuriumor and Salmonella Enteritidis. For example, this system can distinguish more than 300 definitive DTs of S. Typhimurium based on their patterns of lysis to a panel of Salmonella phages.

Phage typing is also commonly used for Escherichia coli (E. coli), the type of bacteria that forms part of the normal gut flora in human and animal intestines, and is particularly susceptible to an attack by T-phage viruses, both ‘T-odd’ phages such as T1 or T7, and, to lesser extent, to ‘T-even’ phages such as phage T2.

Similarly, phage-typing is the most widely recognized typing method for Staphylococcus aureus and is also still used widely for sub-dividing serotypes of Pseudomonas aeruginosa.

Phage typing of bacteria requires a comprehensive panel of different phages, considerable technical expertise, and demands careful control over the testing environment. Phage Consultants is one of very few laboratories in the world with all these attributes, as well as the means, facilities, and trained personnel that allows it to perform phage typing for any type of industrial application or bioprocess. 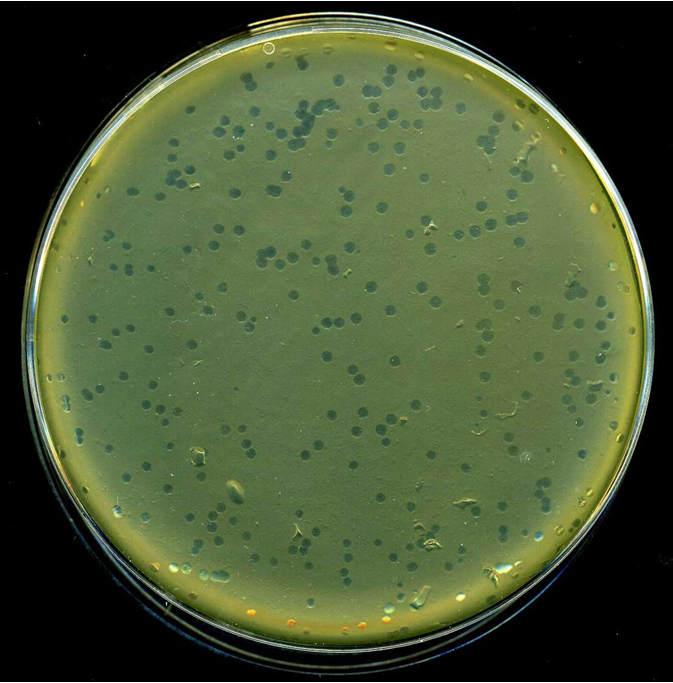 A 10 cm diameter lawn culture of bacteria infected by bacteriophages, showing spotted “plaques” where the bacteria have been killed by the phage virus