Lactose, also called ‘milk sugar; occurs naturally as a simple carbohydrate in mammalian milk, being the disaccharide of simple sugars. Chemically, lactose is composed of molecules of D-galactose and D-glucose. It can exist in either alpha and beta isomeric forms (α-lactose or β-lactose).

Pharmaceutical lactose is obtained from cow milk, where it makes up between 2% and 8% of milk by weight. The chemical and physical stability of crystalline lactose monohydrate powder makes it highly suitable for oral pharmaceutical applications, with versatile properties for binding or filling, compressibility and global availability.

Principal lactose uses are as excipients (filler or filler-binder) in production of pharmaceutical tablets and capsules. They are also useful as diluents in dry-powder inhalation (DPI) formulations and in baby feed formulas or freeze-dried products.

Pharmaceutical lactose plays an important role as binder, carrier and filler and can be used in a wide field of industrial applications like traditional wet and dry granulation (roller compaction), direct compression (DC), spheronization, manufacturing of parenterals or dry powder inhalation (DPI).

However, the main targets for lactose monohydrates are still “classical” oral solid dosage forms like capsules or tablets for prescription, OTC medication, or nutritional uses.

Additionally, amorphous lactose, a mixture of α-, and ß-anomer, has been revealed as advantageous in introducing plasticity into spray-dried and other lactose grades.

This precise targeting is not exclusively limited to pure lactose products. MEGGLE’s expertise in co-processing also allows for tailored co-processed products that blend lactose with other substances, such as cellulose, mircorystalline cellulose, HPMC, Manitol or Starch.

Lactose monohydrate may also present itself as a multifunctional partner together with other excipients in the nature of co-processed excipients (CPEs), which are perceived as a new subclass of materials comprising a physical combination of two or more compendial, or non-compendial components with varying compositions.

Co-processing is not achieved by simple physical mixing but rather by specific, “high energy inputs”, with  functional properties modifying by sophisticated manufacturing processes such as spray-drying, high-shear dispersion, or melt-extrusion.

Although MEGGLE has readily available a wide range of products which fit the needs of the majority of customers, it can also provide tailor made products, which are developed in close co-operation with customers. MEGGLE is fully equipped with the most sophisticated technologies for sieving, milling, agglomeration, and spray-drying, allowing remarkably high degrees of customization to be achieved. 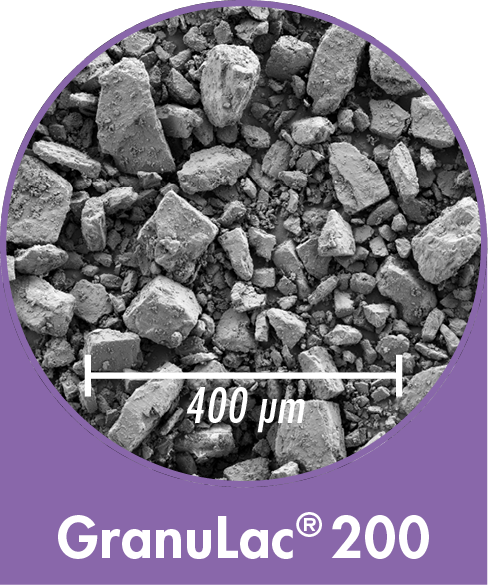