enGenes Biotech has developed X-press™ as an optimized solution for the cost-effective production of recombinant protein and plasmid DNA in microbial expression systems.Leveraged from enGenes’ world-class experience in cutting-edge genetic engineering, combined with a broad expertise in bioprocess engineering, the enGenes-X-press™ Escherichia coli (E.coli) proprietary technology forms a production platform that delivers substantially higher soluble product yields, easier downstream processing and up to 80% reduction in cost of goods sold (COGS).

The technology is based on a genetically modified host cell based on the Escherichia coli B-linage (BL21) that allows introduction of standard expression vectors (with T7 promoter) without cumbersome adaptations. The X-press fermentation process can be implemented with standard fed-batch fermentation equipment.

Reprogramming of the host cell is performed by co-expression of a bacteriophage-derived peptide that stops cell division and host mRNA production and at the same time modulates the host cell metabolism for improved soluble, high level protein production.

The technology is fully scalable from lab to industrial scale (developed process running at >10 m3 scale).

The process advantages of enGenes X-press are borne out by sample protein and other yields:

The enGenes X-press protein production platform is thus made distinctive by a series of unique characteristics:

The economic benefits of the enGenes X-press platform extend into production and process efficiencies. They include:

enGenes-X-press forms a next-generation E. coli expression platform that allows for scalable production of difficult-to-express or even growth-interfering “toxic” recombinant proteins and plasmid DNA at a fraction of previous cost. Patents are pending on X-press technology as a growth-decoupled microbial protein production system. 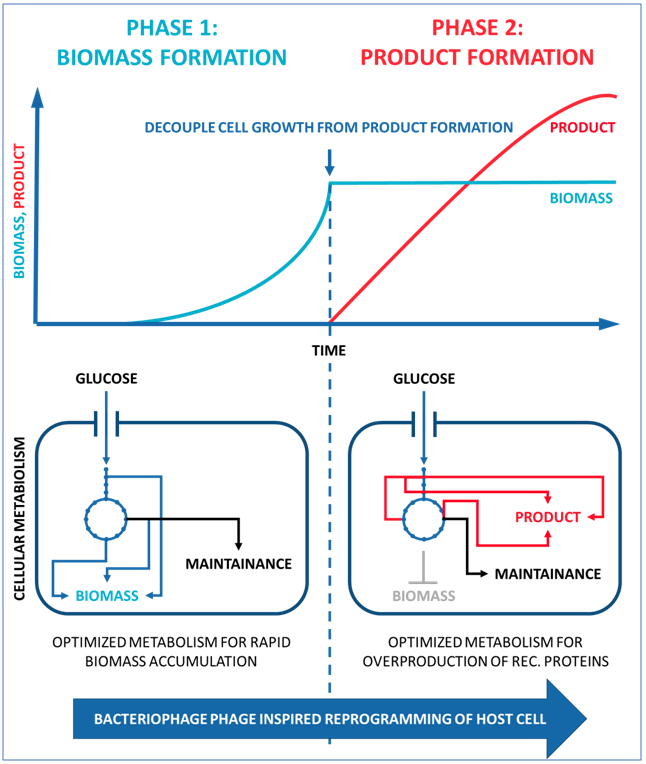