A major advantage of enGenes Biotech’s proprietary X-press™ proprietary technology platform for outstanding  recombinant protein production in Escherichia coli (E.coli) is that it also facilitates the cloning and vector optimization required to ensure proteins that are free of antibiotic markers or antibiotic-resistant genes.

A major problem with the use of microorganisms for enzyme production has been that many of the plasmids used for recombinant protein production in bacteria are based on the use of antibiotic resistant genes as selection markers. This has raised increasing safety concerns, particularly concerning the β-lactams associated with allergic responses in humans or animals or the horizontal gene transfer of these resistance genes.

One solution to the problem is to complement the essential gene with an expression vector in a strain with a defect or inhibited expression of the same essential gene, using for example the dapD gene, which has a role in the Lysine biosynthetic pathway as well as cell wall assembly. While mutations in the dap pathway are lethal, a common limitation has been intrinsic difficulty in construction of a dapD – mutant strain and dependence towards defined culture media composition.

As alternatives, other essential genes have been targeted for the same purpose, particularly infA coding for a translation initiation factor. This system is tightly regulated, with no cross-feeding effect observed since initiation factors released into the media from lyzed cells are not absorbed by plasmid-free cells.

A further variant of the essential gen complementation strategy uses amino-acid auxotrophy complementation where a proline-auxotrophic strain obtained through chromosomal pro BA gene deletion is used to express antibody Fab fragment and plasmid-mediated complementation is used as a second selection mechanism to completely abolish plasmid loss during fermentation. On this principle, an E. coli M15-derivated glycine-auxotrophic strain has been shown to produce comparable amounts of recombinant protein as a conventional system.

Other strategies for eliminating antibiotic markers include:

According to the X-press principle reprogramming of the host cell is performed by co-expression of a bacteriophage-derived peptide that stops cell division and host mRNA production and at the same time modulates the host cell metabolism for improved soluble, high level protein production.

The technology allows secretion of proteins targeted to the periplasmic space to the cell free supernatant, thereby allowing a cost-effective manufacturing option comparable to yeast-based expression systems. It also enables recombinant product formation to be decoupled from cell growth, enabling bioprocessing with clear separation of biomass growth and product formation. This in turn makes it possible to generate significantly higher specific and volumetric yields compared to the previous state-of-the-art (Escherichia coli BL21 (DE3).

enGenes already provides X-press with a ready-to-go optimized vector backbone and host strain. However, where necessary, it can also perform optimization on different levels to achieve client yield expectations. enGenes can also provide an ‘out of the box’ engineered X-press strain to meet demands for antibiotic resistance marker-free selection.

Other elements of the enGenes portfolio, such as generating expression strain, host cell engineering, feasibility studies, bioprocess optimization, and final purification protocols can all be tailored into an antibiotic-free protein project, with additional assurance of greater cost-effectives and readier acceptance by regulatory authorities, due to the absence of antibiotic resistance markers. 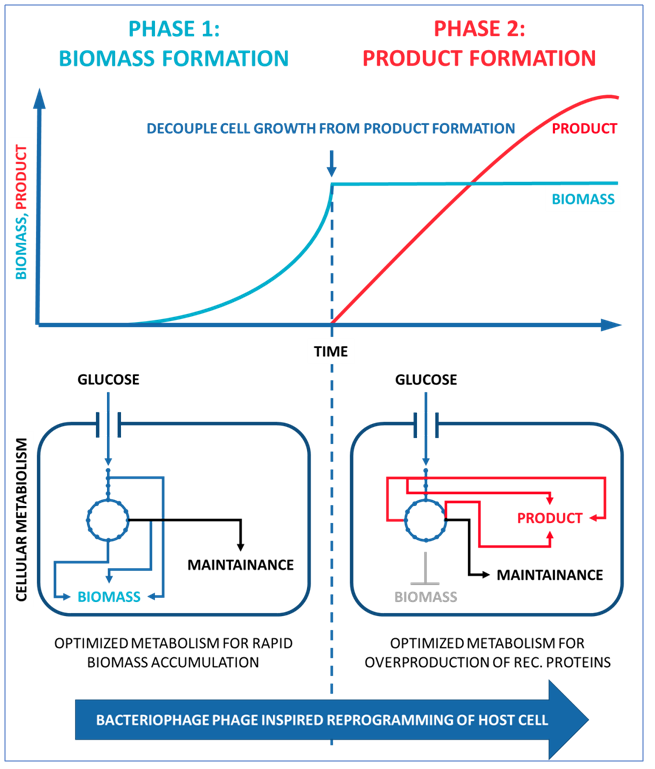