New in vivo results in mice, recorded in a laboratory study conducted by world-renowned researcher Prof. Peter Holst of the University of Copenhagen, have clearly shown that this new serotype elicits comparable immune reactions against a given antigen as effective as Ad5, even in animals that were pre-immunized against the Ad5 serotype.

“The study underlined the importance of Ad19a/64 development into a vaccination vehicle to solve the problem of pre-immunized populations,” commented SIRION Biotech CEO Dr. Christian Thirion.

“We already knew that pre-immunisation rates against our novel Ad19a/64 are very low in human populations, an important trait for a future vaccination candidate.” he explained.

“But we were not sure whether pre-acquired immunity against the common Ad5 might generate a cross-reaction. This study seems to have removed that uncertainty,” said Dr. Thirion.

As a next step, SIRION Biotech will now enter first pre-clinical testing of the Ad19a/64 vector system in non-human primates to cure human papillomavirus (HPV).

Adenovirus vectors enable the direct introduction of genetic antigen information into patients instead of inoculating them with inactivated pathogen. This method of direct antigen presentation is thought to hold the solution for a number of diseases currently unanswered by standard vaccination methods.

Ad19a/64 has been considered highly promising in this context because it transduces human myoblasts and dendritic cells better than any other serotype.

From the beginning, SIRION’s mission has been to change the paradigm for viral vector supplies, with ability to develop and supply all common viral vector types (adenovirus, lentivirus, AAV, etc.) within a matter of weeks at the concentration titers and quantities needed for preclinical human and animal testing.

SIRION’s core expertise lies in custom virus generation for genetic engineering of mammalian cell systems. With its comprehensive viral vector portfolio, SIRION offers a suitable option for almost any in vitro and in vivo application. SIRION can supply all three of the most commonly used virus systems for gene manipulation: recombinant adenovirus particles (AVs), lentiviruses and adeno-associated viruses (AAVs). 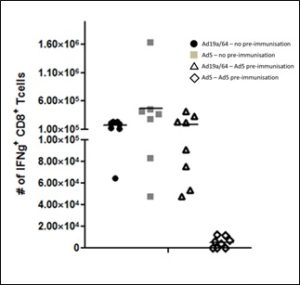 Mice were treated with Ad5 or Ad19a/64 vectors carrying the genetic code for a defined antigen as vaccination target. In two groups (Triangles and diamonds) the animals received a round of Ad5 particles before the treatment. Immunization success 10 days post-application was measured by determining IFNg+ levels in the spleens of all animal groups. Pre-immunization against Ad5 shut down its performance (diamonds), while Ad19a/64 was undisturbed by the pre-immunization event