In large part the ‘Best Optimization Specialists’ award celebrates the impressive and rapid progress SIRION Biotech has made in its mission of creating a new generation of viral vector technology solutions since its founding in 2005, establishing itself as Europe’s leading developer and manufacturer of viral vectors.

SIRION has succeeded in creating new viral vectors for cell therapy, gene therapy and vaccine development using a number of world-class and industry-leading platforms for lentivirus, adenovirus and AAV production. The company has now completed more than 2,000 successful projects at various scales in drug development, cosmetics, food production and other industries.

The GHP ‘Best Transduction Enhancement’ award pays tribute to the significant contribution of SIRION’s patented LentiBOOST® technology as a highly effective, non-cytotoxic transduction enhancer for preclinical and clinical application of lentiviral vectors. It is a universally acting (receptor independent) adjuvant that can be applied to a wide range of clinically relevant cell types including CD34+ hematopoietic stem cells (HSCs), primary T cells and NK cells.

As a promising candidate to improve clinical transduction protocols for ex vivo gene therapies and CAR-T cell therapies, LentiBOOST® is currently being used in more than 20 Phase III and I/II clinical trials worldwide.

SIRION’s licensing strategy for LentiBOOST® allows research hospitals to apply the technology royalty-free to help patients and speed uptake of the technology. Unlike most competitors, it exhibits dual action, increasing the overall transduction efficacy at significantly lower vector dose, and increasing the number of stably integrated vector copies (VCN). Further advantages, including non-toxicity and access to GMP material for clinical use, are making LentiBOOST® the transduction enhancer of choice for the biotech and pharmaceutical industries. LentiBOOST® is widely used in ex vivo cell therapy, both for stem cells and in the T cell space including CAR-T and TCR. Its mode of action allows improved transduction of many further cell types like NK cells and B cells.

SIRION Biotech began its customer business in 2007 in Munich, setting their goal to spark a new generation of viral vector technologies for gene and cell therapy as well as vaccination development. This meant building novel, all-encompassing viral vector platforms for lenti-, adeno-, and adeno-associated viruses which expedite its partners’ advances in the drug, cosmetics, and food industries. To date SIRION has completed over 2000 projects of all sizes, working closely with over 200 independent customer groups from academia and industry.

The GHP judges gather information independently from a variety of publicly accessible sources which are assessed alongside any material supplied by a nominating party or the nominee themselves. 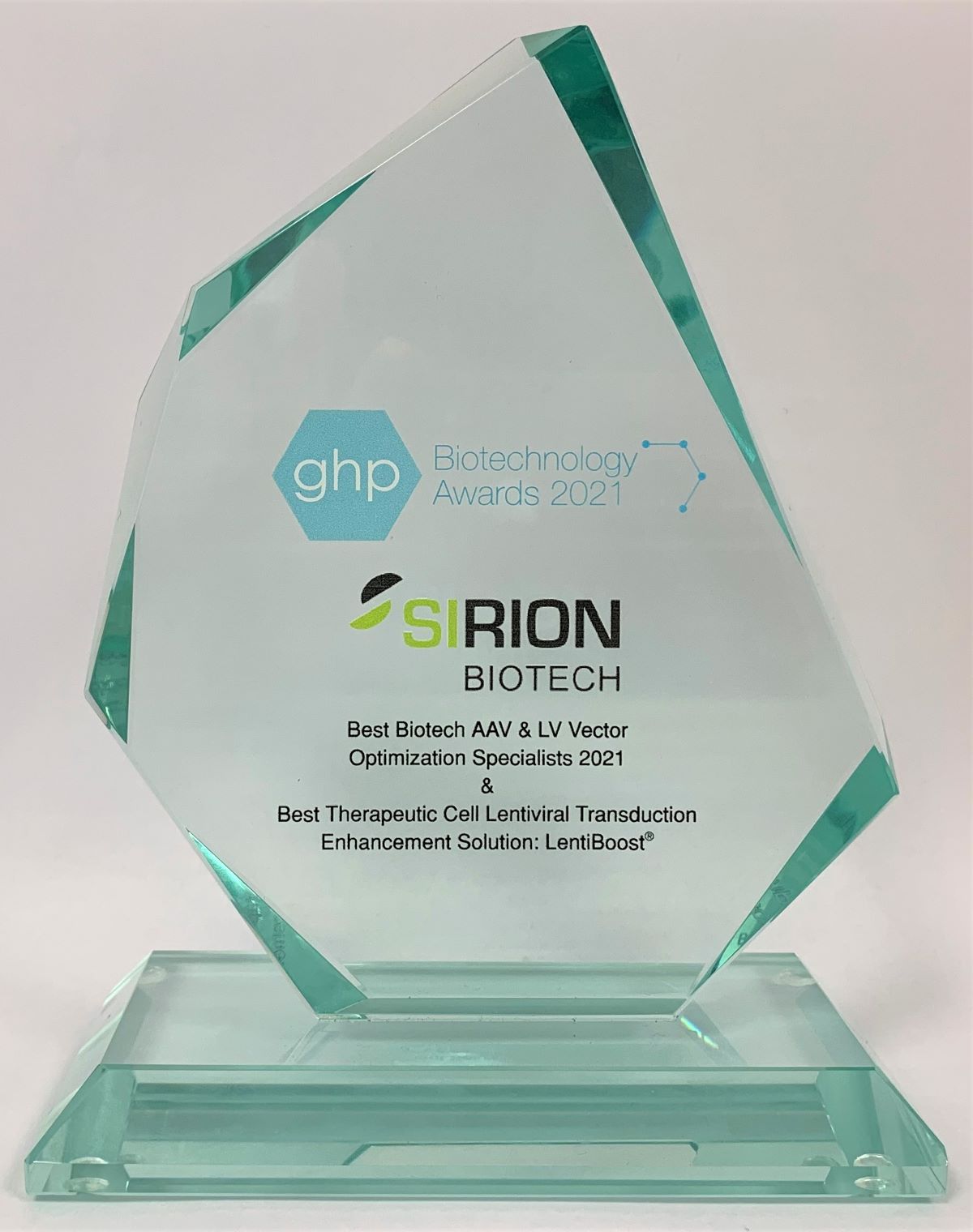