Martinsried, Germany: – Leading Viral Vector technology specialist SIRION Biotech has significantly expanded its presence in North America with the opening of its new office in Massachusetts as part of the fast expanding Cambridge cluster for genetic and cell therapy research.

The new site will handle business development and liaison between SIRION and its growing number of American partners as part of SIRION’s strategy to expand its profile in the USA.

Gene therapy has seen strong clinical advancement, and SIRION is becoming a partner of choice in this growing sector. It recently joined forces with California-based Denali Therapeutics, a biopharmaceutical company developing a broad portfolio of product candidates for neurodegenerative diseases and has also entered collaborations with Orchard Therapeutics, as well as a major public company that is advancing the technology.

Dieter Lingelbach, MD and Chief Operating Officer of SIRION Biotech, commented: “As transduction and manufacturing efficiencies are critical issues in gene therapy, SIRION’s viral vectors are essential to the success of their partnering companies.”

“Since two-thirds of SIRION’s revenue already comes from US customers and partners, opening an office in a Life Science hub like Cambridge, Massachusetts further demonstrates our commitment to supporting existing customers and further expanding into the US market,” Mr. Lingelbach added.

Founded at Martinsried, near Munich, in 2007, SIRION Biotech has become Europe’s leading commercial supplier of viral vectors used for genetic research, clinical target validation, gene therapy and vaccination studies. It is SIRION’s mission to change the paradigm for viral vector supplies, with their ability to develop and supply all major viral vector types (adenovirus, lentivirus, AAV, etc.) within a matter of weeks at the concentration titers and quantities needed for preclinical human and animal testing. 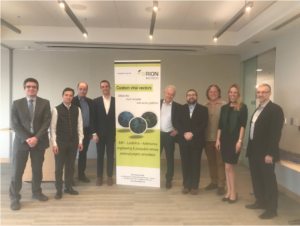 The SIRION Biotech Inc. team celebrate their move to Massachusetts with a Grand Opening Reception at the Forsyth Institute in Cambridge. (Photo: Business Wire)