Founded as a start-up in Martinsried in 2007, SIRION Biotech is now one of a handful of specialists worldwide that supports drug developers in their drive for the most innovative therapies with its vector technologies.

The company’s core competence is to develop and optimize vector technologies to enable more effective and financially reasonable treatments for millions of gene­ and cell­therapy patients. Through large­scale research collaborations, SIRION has become a significant player in a worldwide market estimated to be worth more than one billion US dollars per year.

In a recent interview SIRION the founder, CEO Dr. Christian Thirion provided and the COO Dieter Lingelbach new insights into the future strategic direction for the 12­year­old company.

“There are about 8.000 diseases known to have a monogenetic cause, with the most prominent including genetic blindness (retinitis pigmentosa), hemophilia, SMA and for example Alzheimer’s, Parkinson’s, metabolic diseases, neuromuscular diseases or muscle atrophy,” Dr. Thirion noted.

“The idea is to ‘fix’ the genetic defects that cause such diseases. There is a blueprint in every cell telling it what proteins to express and how. When missing, such blueprint needs to be delivered into the cell. SIRION can develop the “shuttle” to deliver the ‘therapeutic construct’ into the particular set of cells with the missing genetic information, either directly or indirectly. Our desired goal is a ‘one shot’ therapy.

“We work with so-called adeno-associated viruses (AAV) of which we only utilize the outer protein shell, its capsid. The actual virus-gene-information is eliminated and replaced by genetic construct aimed at fixing the disease. The library of different mutated capsids can be selected through a process called artificial evolution to select a high performing mutant that will improve targeting of e.g. liver or lung cells,” said Dr. Thirion.

He said SIRION was currently working in close collaboration with Prof. Grimm of Heidelberg University Hospital, to develop AAV capsids that are about 10,000 times more efficient in delivering constructs into target cells than traditional methods and vectors.

It is also working on improving lentivirus applications, such as the vectors mainly used in the field of immunotherapy.

“Certain tumors are not being recognized by the immune system. To bypass such protection, CAR-T or TCR-T cell receptors of the human immune systems are being reprogrammed with the help of lentiviral vectors so that they recognize the tumor cells and fight them. In all these new technologies costs remains a huge challenge. Treatment costs per patient can reach into millions,” said Dr. Thirion.

Manufacturing of genetically modified cells is very expensive. SIRION’s unique focus enables it to spearhead massive advances in manufacturing and downstream purifications, with its LentiBoost® technology promising substantial progress through material savings and increasing efficiency, as well as five to ten fold reductions in the associated production costs for viral vectors.

Dr. Thirion said this was a field in which SIRION had few competitors.

“Worldwide only a handful of companies focus specifically on viral vector technologies like SIRION. This presents a strategic advantage as SIRION does not face distractions in conducting clinical studies on its own. Instead, we concentrate on the development of the most highly innovative viral vectors for our partners in clinical trials.”

“Of critical importance are the US National Institutes of Health (NIH), Orchard Therapeutics in London, Denali Therapeutics in San Francisco and Acucela in Seattle and Tokyo. In total, we are involved in 12 clinical programs,” said Dr. Thirion, adding that the Denali partnership is focused on Parkinson’s, Alzheimer’s and ALS.

The three pillars of SIRION’s current business model are provision of viral vector materials for research (non-human) use, engagement in large scale development collaborations and, most recently, licensed human clinical applications, and with the highest value added potential.

“With new funding of more than double-digit million Euros, SIRION does plan to increase its own value added in the drug development arena by entering selected preclinical projects,” Dr. Thirion revealed.

He said these could be leveraged from SIRION’s existing contacts with more than 200 of the world’s leading laboratories and access to their knowledge regarding certain disease areas. For 2019, SIRION aims for revenues over 10 million Euros.

“Simply by participating in clinical and commercial successes of its development partners, SIRION expects a significant increase over the next 10 years,” said Dr. Thirion.

SIRION, which recently opened new offices in the USA and Paris, is looking for further international expansion.

“Japan is the world’s second largest pharmaceutical market and therefore important, Asia as well as Korea and Israel are also of interest,” said Dr. Thirion, who added that the company is planning to more than triple its lab and office spaces short term.

Dr. Thirion said the SIRION growth strategy requires outside funding of about 20 to 30 million Euros.

“Hence, an IPO is being considered as a serious option, with talks with US investors ongoing,” said the SIRION CEO, who noted that the company was well received by Europe-based investment firms at a recent Euronext seminar.

SIRION is also seen as a promising takeover candidate for Big Pharma.

“In in the recent past: Novartis acquired Avexis for about 8.7 billion USD in 2018 and Roche acquired Spark Therapeutics for 4.3 billion USD in February 2019. Spark has several developments in the pipeline, among others to treat hemophilia and blindness.

“Our early seed investors were initially aiming for a straight out exit to a strategic investor, be it from within or from outside this country. Developing an independently strong and mid-sized company with a base in Bavaria may also be a promising option,” said Dr. Thirion.

Founded at Martinsried, near Munich, in 2007, SIRION Biotech has become Europe’s leading commercial supplier of viral vectors used for genetic research, clinical target validation, cell and gene therapy and vaccination studies. It is SIRION’s mission to change the paradigm for viral vector supplies, with their ability to develop and supply all major viral vector types (adenovirus, lentivirus, AAV) within a matter of weeks at the concentration titers and quantities needed for preclinical human and animal testing. 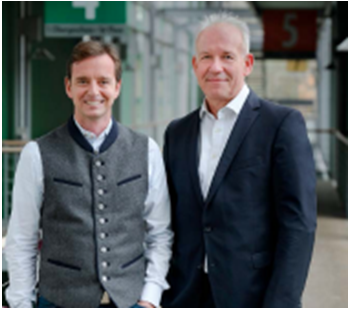