Phage Consultants (PC) was created to help clients whose production is based on bacterial activities in order to combat bacteriophage (phage) infection.

The company now provides some of the world’s most expert testing services to detect bacteriophage and prophage presence across a wide spectrum of bacterial hosts and thus combat contamination of a wide variety of microbial and bacteriological processes.

Bioprocessing operations face the threat that bacteriophage viruses that infect bacteria will infect the cell cultures used to manufacture biotherapeutic proteins in bioreactors. Contamination with bacteriophages may completely paralyze an operation.

The original purpose of Phage Consultants, founded in 2007 by eminent phage specialist microbiologist  Dr. Marcin Los, was to help companies fight and prevent phages from attacking their microbial fermentation systems.

Dr. Los has published several scientific papers about phages in industrial microbial systems (see Resources) that inspired biotechnology companies to contact him for advice on dealing with phage contamination problems.

Phage Consultants has developed panels of  tests for identification of phages and inactivation phages using various disinfectants. It is very important, as majority of commercially available disinfectants are not effective against phages. Tests are done by real phage specialists and scientists, who really understand phage biology and techniques .The experts at Phage Consultants track down the origin of a phage contamination, eliminate the phage, and develop ways to reduce the risk of a recurrence. Solutions to phage problems are not based on well-defined protocols, off-the-shelf products, or trade secrets.

Each case is unique, and Dr. Los’ team uses their experience and expertise in identification of bacteria and phages contaminating processes, and also in identifying the root causes of both phage and bacterial contamination and the weak points that allow it to spread. The solution depends on the properties of the phage and the site of contamination.

Phage therapy to combat bacterial infections was first proposed and trialed in the early 20th century and has acquired new relevance in a world on the cusp of widespread antibiotic resistance. Although bacteriophages continue to lack drug approval in Western medicine, an increasing number of patients are being treated on investigational new drug basis. Phages are also relevant in bacterial and microbial identification.

To streamline the production of high-quality and clinically safe phage preparations, requires a systematic procedures for phage purification, together with isolation, liter-scale cultivation, and concentration. A typical phage purification protocol uses a combination of modified classic techniques, modern membrane filtration processes and elimination of organic solvents. Implementation of standardized phage cultivation and purification methods developed by specialist phage research laboratories will be essential in introducing phage-based therapies to the life sciences.

At the same time, the rise of biotechnology and threats to production caused by fermentation problems has made bacteriophage contamination an urgent problem that needs in-depth expertise to combat.

Signs of phage contamination are usually easy to spot. Bacterial cultures that were growing predictably, dividing every twenty minutes in case of E. coli, suddenly lose optical density and become full of filaments and clumps. Alternatively circular develop ‘bite’ areas on their circumference or no-growth ‘holes’ on the plate.

From the 1950s, research on Escherichia coli (E.coli) phages has outlined the biology of viruses that promptly lyse their bacterial hosts. These studies revealed progressive parasitic relationships and also that many phage-bacterium complexes, such as phage contamination E. coli persist in a more enduring symbiosis, lysogenicity. One factor at work here is that phages, like E. coli, go through growth phases: infection, followed by multiplication, cell lysis and re-infection. The vigorous mixing used for liquid cultures can promote phage reinfection.

Fermentation problems  can arise from various sources of contamination in a facility including raw materials, equipment malfunction, improper maintenance of equipment, and operator handling errors. Various methods for inactivation of phages include exposing them to gamma-irradiation or ultraviolet-C irradiation, filtration, or treatment with high-temperatures.

Phage Consultants specialists analyze biomanufacturing sites and select the best cleaning procedures for a contaminant, which vary in their resistance to chemical solvents. It can, for instance, advise clients on cleaning procedures and adaptation of procedures and processes. Solutions may involve engineering bacterial cell lines or manipulating growth conditions to prevent the growth of phages.

It is very important to test culture strains before scale up, because phages and prophages may be propagated and then contaminate a whole facility.

Most companies currently contact Phage Consultants to solve phage problems, but some are looking for strategies to prevent phage contamination that could be more cost-effective over the long term. Phage Consultants can also help companies building new bioprocessing facilities with layouts and architecture that can reduce phage contamination risks.

Infection of bacterial cultures by bacteriophages as well as prophage induction in the host cells are serious problems in both research and biotechnological laboratories. Generally, prevention strategies (like good laboratory/factory hygiene, sterilisation, decontamination and disinfection) are necessary to avoid phage contamination in labs. The use of immunised or resistant bacterial strains against specific phages is not a complete answer since these may have inferior properties than those of phage-sensitive parental strains, and they usually do not show a resistance against broad range of phages, which leaves them susceptible to the vast majority of potential phage contaminants. 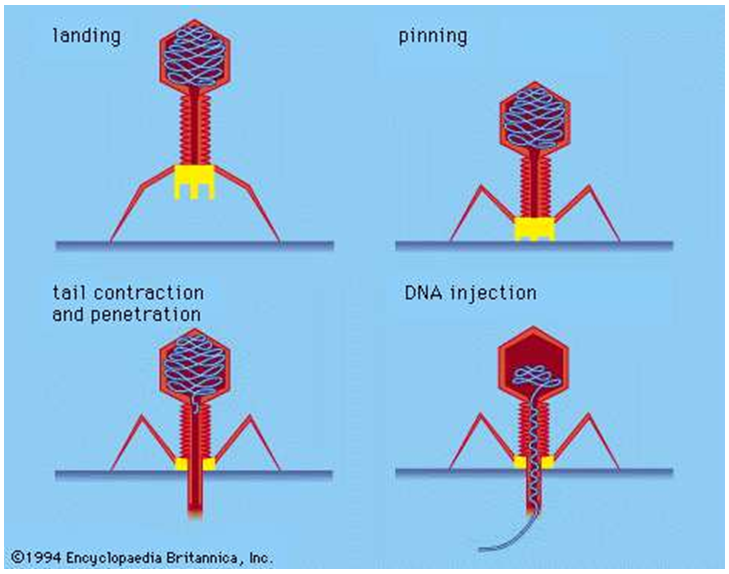 Bacteriophage mechanism of action on the cell wall of the bacterium (from Encyclopedia Britannica).