Dr. Christel. currently Vice President, US Operations, will relocate to Massachusetts to take up his new role, which will involve expediting SIRION’s gene therapy research & advance drug development in the US market.

Dr. Christel has lived and worked as a molecular biologist on both sides of the Atlantic. After receiving his PhD at the Technical University of Munich (TUM), he completed four productive years as postdoctoral fellow at the University of Iowa Carver College of Medicine.

With his well-based understanding of molecular physiology and bilingual background, Carl Christel will be a vital connection between SIRION’s German-based headquarters and the U.S. market, ensuring streamlined global communications.

Rajesh Panigrahi is an experienced virologist who has devoted more than 10 years of research to investigating the connection between viruses and certain forms of cancer. As a postdoctoral fellow at UMass Medical School in Worcester, Massachusetts, his research was mainly focused on developing the therapeutic EBV vaccine as well as identifying the best AAV vector for the treatment of EBV lymphomas. With his experience in virology, he joined Sanofi as a scientist, where he was involved in the drug development process.

Roman Braun is a scientific leader with broad experience in quantitative research, autoimmunity, cancer, pathogen-host interaction, and vaccine development. He studied in Konstanz, Germany and Bern, Switzerland and graduated with a PhD in Immunology. As a postdoctoral fellow in immunology and vaccine development at the Institute for Virology & Immunology in Bern, Switzerland, he developed novel vaccine formulations and systems biological approaches to understand vaccine response in livestock. Later, at Harvard Medical School and Children’s Hospital in Boston, Massachusetts, Dr. Braun was involved in research to understand inflammatory diseases, cancer, and hematological disorders.

“With Carl leading our Cambridge office, we’ll be especially well positioned to broaden our reach into the U.S. market, and we welcome Rajesh and Roman to the team and look forward to utilizing their expertise to support our existing customers and further drive our international growth.

Founded at Martinsried, near Munich, in 2007, SIRION Biotech has become Europe’s leading commercial supplier of viral vectors used for genetic research, clinical target validation, cell and gene therapy and vaccination studies. It is SIRION’s mission to change the paradigm for viral vector supplies, with their ability to develop and supply all major viral vector types (adenovirus, lentivirus, AAV) within a matter of weeks at the concentration titers and quantities needed for preclinical human and animal testing. 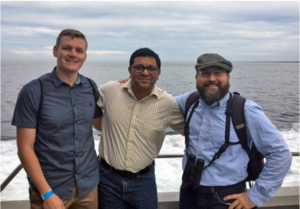