Evercyte’s highly differentiated human cells are becoming ever more important as in vitro test systems in various fields of biomedicine, toxicology and biotechnology.

Evercyte possesses an extensive and constantly growing panel of cell types derived from all main relevant human tissues and bodily fluids that can be applied to highly targeted and precise assays in applications that include cytotoxicity testing, cytokine targeting, senolytic and senomorphic drug testing, checking for anti-fibrotic activity or neo-angiogenic potential, and testing wound-healing activity.

Although normal somatic cells maintain a phenotype similar to the corresponding cells in vivo, the finite life spans of normal cells limits their application to testing. And while tumor cells can be grown indefinitely, they lose essential characteristics. These disadvantages of normal and tumor cell lines mean most in vitro bioassays cannot be reproduced and standardized.

In order to circumvent these limitations, Evercyte has focused on the establishment of cell lines that don’t suffer from growth arrest while maintaining a phenotype that closely matches the corresponding primary or ‘normal’ cells. It achieves this by ectopic expression of the catalytic subunit of human telomerase in primary cells followed by a detailed characterization of the cellular phenotype.

Immortalized human cell types can be applied across a wide range of specific applications that include:

All of these testing services deliver results in between two and six weeks, depending on number of samples or compounds to be tested, and number of replicates and concentrations requested. 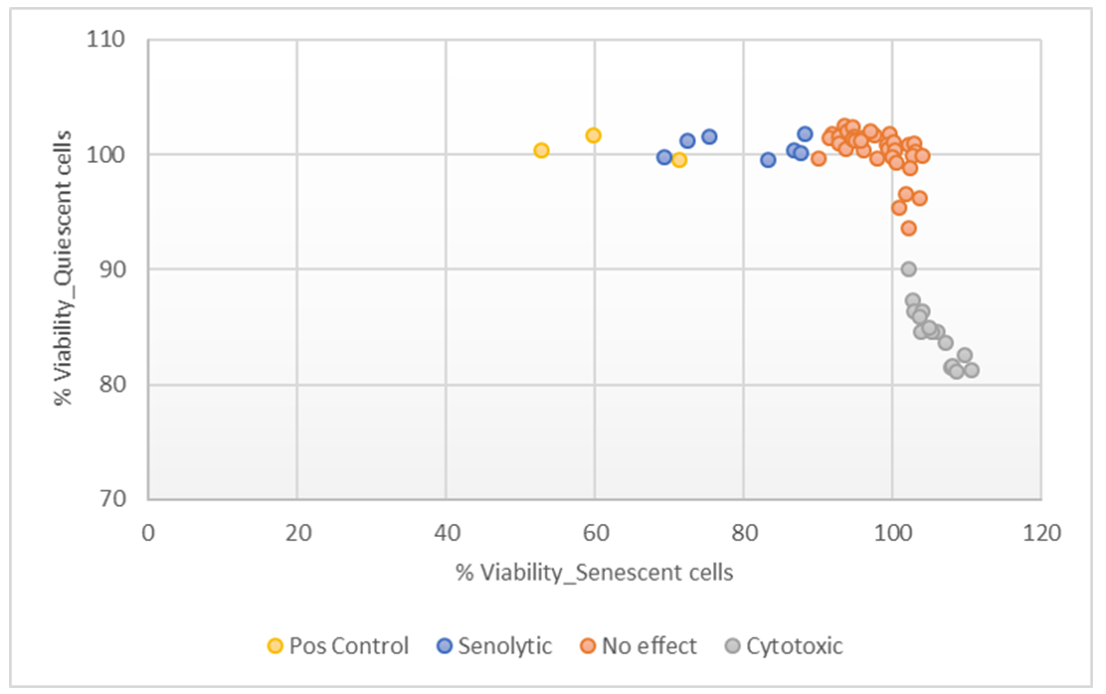 Testing senolytic activity of compounds: Human quiescent and senescent (SIPS) skin fibroblasts are treated with compounds and cellular viability is measured after 3 days. This allows Evercyte to identify compounds with a potential senolytic (blue) activity against senescent cells as well as cytotoxic activity (gray) against growth arrested control cells.