The study was an academic collaboration between teams from the Bioseparation Engineering Group at the School of Engineering and Design, Technical University of Munich (TUM), represented by Prof. Sonja Berensmeier, and enGenes Biotech, represented by CEO Dr. Juergen Mairhofer and research scientist Dr. Patrick Stargardt. Lead author was Alexander Zanker, PhD candidate at TUM.

Their peer-reviewed research article is now published in the Biotechnology Journal under the title ‘Direct capture and selective elution of a secreted polyglutamate-tagged nanobody using bare magnetic nanoparticles’.

The research effort was inspired by upstream difficulties being experienced by the biotech industry in low yields and intracellular product location. The team saw an opportunity to combine two innovative technologies: the method developed by the Technical University of Munich of boosting protein purification by using specific peptide tags and bare magnetic ferric nanoparticles and the potential of the enGenes X-press® growth-decoupled Escherichia coli-based expression and production platform to deliver high yields and protein secretion to the extracellular medium (EM).

The researchers saw secretion and direct capture of proteins from the extracellular medium as a promising approach for purification, thus enabling integrated bioprocesses. They succeeded in demonstrating the secretion of a nanobody (VHH) to the EM and its direct capture by using a specific peptide tag and bare, non-functionalized magnetic nanoparticles (MNPs).

The team fused an ompA signal peptide for periplasmic localization, a polyglutamate-tag(E8) for selective MNP binding, and a factor Xa protease cleavage site N-terminally to the nanobody. They enabled extracellular production of the E8-VHH (36 mg L–1) at shaker flask level by using the X-press E. coli-based expression system.

The study proved that direct binding of E8-VHH to the bare magnetic nanoparticles was possible and could be drastically improved up to a yield of 88% by adding polyethylene glycol (PEG). The selectivity of the polyglutamate-tag enabled selective elution of the E8-VHH from the bare MNPs while raising the concentration factor five-fold and quadrupling the purification factor.

“We are the first to demonstrate the efficient capture of a polyglutamate-tagged nanobody with low-cost, non-functionalized magnetic nanoparticles after being secreted by the enGenes-X-press strain,” the study team concluded, noting that it had confirmed last year’s findings by Kastenhofer et al. that the X-press system is a highly potent expression strain that can replace conventional E.coli strains since it enabled secretion of the nanobody.

“Our proof of principle emphasizes using the polyglutamate-tag as fusion tag for extracellularly produced proteins and the subsequent capturing by non-functionalized MNPs. Our findings conclude the promising combination of the enGenes-X-press strains, the polyglutamate-tag, and bare MNPs for proteins in general, not just nanobodies,” the team observes.

The researchers also believe the system could be applied to in-situ product removal (ISPR) of secreted proteins with magnetic nanoparticles, as demonstrated by Gädkeet al. in J. Biotechnol. 242, 2017.

“Undoubtedly, further process optimization, such as the variation of precipitation or more elaborate selective elution could result in higher purities and yields, which is of future interest and would enhance the utility of the method. It would be exciting to try out a more continuous approach by retaining the cells and contacting the EM with MNPs,” the study concludes, also noting that the basic technique allows for combination of magnetic ATPS or magnetic micellar ATPS, which also holds great potential.

For enGenes, Dr. Mairhofer commented: “This study breaks new ground in proving a combination of two potent technologies showcased to be functional, and proven under peer-review.”

This new method has genuine potential to significantly reduce overall manufacturing costs in upstream and downstream manufacturing, not least because the DSP is less expensive than currently used resins for protein purification,” he continued.

Dr. Mairhofer noted that the new method is not just applicable to biopharma production but also to industrial biotech and alt proteins for novel food applications.

enGenes Biotech GmbH (enGenes) is a contract research, development and manufacturing company that provides leading edge technologies and production services focused on recombinant proteins in bacteria. The company’s mission is to provide cost-effective and scalable production of recombinant proteins at a fraction of current cost, allied to a vision of developing a world-class portfolio of cutting-edge protein production technologies, relevant to a broad spectrum of application fields.

enGenes has developed advanced technologies to drive more cost-effective recombinant protein production processes, including its proprietary enGenes-X-press™ E. coli platform that achieves outstanding yields of soluble and active recombinant protein. enGenes-X-press™ has been successfully applied for the manufacturing of enzymes and biopharmaceutical products that failed to give economically feasible yields in a conventional expression host. 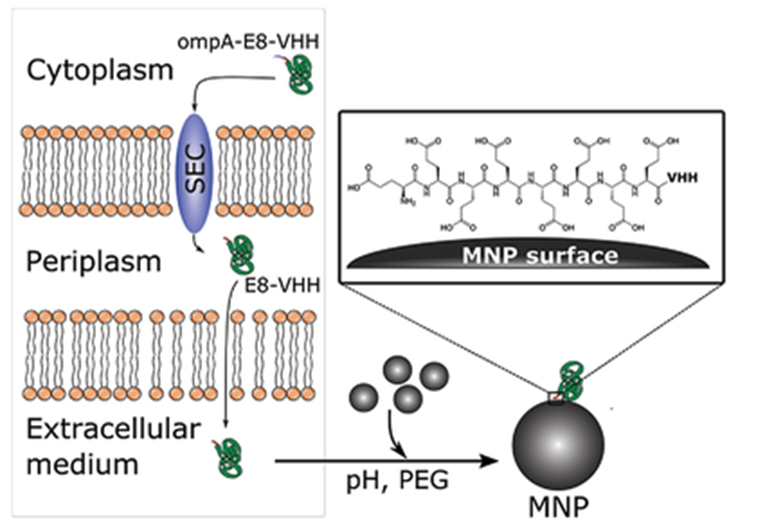 At the heart of the studied method is innovative multiple fusing of an ompA signal peptide for periplasmic localization, a polyglutamate-tag(E8) for selective MNP binding, and a factor Xa protease cleavage site N-terminally to the bare magnetic nanobody, with secretion drastically improved up to a yield of 88% by adding polyethylene glycol (PEG)