To get in touch with BIOSYNTH Molecule of the Month: Rapamycin, simply fill out the form below.

BIOSYNTH Molecule of the Month: Rapamycin

With more than 100,000 substances and chemical entities in its product portfolio, microbiology and organic fine biochemical CDMO and specialist supplier, BIOSYNTH AG, has countless molecular stories to tell.

This month we are focusing on the fascinating macrolide Rapamycin, first discovered on lonely Easter Island in the Pacific, that has potent immunosuppressant medicinal applications in preventing transplant rejection and coating coronary stents.

Rapamycin (BIOSYNTH catalog number Q-201659) takes its name from Rapa Nui, the traditional Polynesian name of Easter Island. Also known as sirolimus, it was first isolated in 1972 by Surendra Nath Sehgal and colleagues from samples of Streptomyces hygroscopicus discovered on the Island in 1965.

Rapamycin is biosynthesized by combining a type I polyketide synthase (PKS) in conjunction with a nonribosomal peptide synthetase (NRPS) which organize the domains responsible for the linear polyketide of Rapamycin into three multienzymes, RapA, RapB, and RapC, containing a total of 14 modules. The linear polyketide is then modified by the NRPS, RapP, which attaches L-pipecolate to the terminal end of the polyketide, and then cyclizes the molecule, yielding the unbound product, prerapamycin. This core macrocycle, is then modified by an additional five enzymes (see illustration) to yield the final product, Rapamycin or sirolimus.

Sirolimus was initially developed as an antifungine and antibiotic agent. However, this was overtaken when it was also discovered to have powerful immunosuppressive and antiproliferative properties due to its ability to inhibit the mTOR (mammalian target of Rapamycin) gene that encodes the kinase that regulates cell growth, cell proliferation, cell motility, cell survival, protein synthesis, autophagy, and transcription.

These properties give Rapamycin very potent immunosuppressant properties by inhibiting activation of T cells and B cells by reducing their sensitivity to interleukin-2 (IL-2) through mTOR inhibition.

This means Rapamycin can be usefully applied to prevent kidney and other organ transplant rejection, coat coronary stents, and treat the rare disease lymphangioleiomyomatosis that progressively leads to cystic lung destruction, particularly in women of child-bearing age.

The US Food & Drug Administration (FDA) approved Rapamycin as an immunosuppressive and antiproliferant in 1999 and it’s now marketed as Rapamune by Pfizer.

Looking further ahead, the antiproliferative effects of sirolimus may have a role in treating cancer by enhancing the immune response to tumor targeting. It has been shown to inhibit the progression of dermal Kaposi’s sarcoma in kidney transplant patients, for example.

Even more exciting, Rapamycin may hold a key to longer life since mTOR1 has been shown (2003) to be important in aging, with a study indicating that sirolimus inhibited and slowed aging in worms, yeast, and flies. Later it was found to improve the condition of mouse models of various diseases of aging.

N.B. – Biosynth Rapamycin is for research and development only 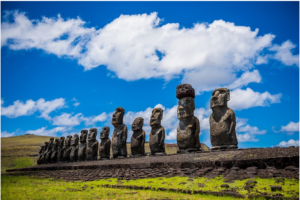 Discovered near statues to the dead, a potential key to longer life 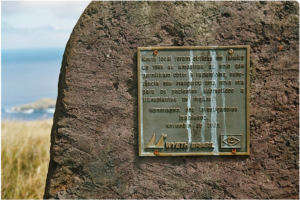 The Easter Island plaque commemorating the first discovery of Rapamycin in January 1965. 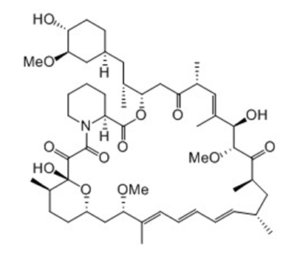 Prerapamycin, unbound product of a type I polyketide synthase (PKS) in conjunction with a nonribosomal peptide synthetase (NRPS) 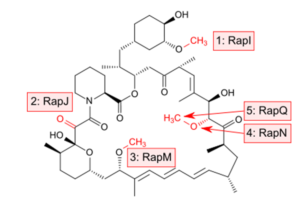 Sequence of “tailoring” steps that convert unbound prerapamycin into rapamycin