To get in touch with BIOSYNTH Molecule of the Month: Amygdalin, simply fill out the form below.

BIOSYNTH Molecule of the Month: Amygdalin

Here is an example of the molecular entities that BIOSYNTH regularly features on its website every week. This month we are focusing on amygdalin – the substance that gives cyanide its notorious ‘bitter almonds’ signature but also a source of essential trace nutrients.

Amygdalin is found in many plants, but most notably in the seeds (kernels) of apricot, bitter almonds, apple, peach, and plum. Within these plants, amygdalin and the enzymes necessary to hydrolyze them are stored in separate locations so that they will mix in response to tissue damage. This provides a natural defense system.

Amygdalin is classified as a cyanogenic glycoside because each amygdalin molecule includes a nitrile group that can be released as the toxic cyanide anion by the action of a beta-glucosidase: eating amygdalin will cause it to release cyanide in the human body, and may lead to cyanide poisoning.

Amygdalin was first isolated as a compound from bitter almonds during the 1830s, initially considered non-toxic.

From the early 1950s, amygdalin was notoriously promoted as an alternative cancer treatment, under the misnomer vitamin B17, first in Russia and a few years later in the US in a semi-synthetic, injectable form, patented as Laetrile.

It became the most commonly used non-conventional anti-cancer treatment but soon, studies found both amygdalin and laetrile to be clinically ineffective, not to mention potentially toxic. Researchers found that amygdalin taken orally undergoes enzymatic hydrolysis via β-Glucosidase and is converted to two glucose molecules as well as mandelonitrile, which due to its poor stability is spontaneously converted to hydrogen cyanide and benzaldehyde, opening up risk of . cyanide poisoning. The promotion of laetrile as an anti-carcinogenic has been described in medical literature as “the slickest, most sophisticated, and certainly the most remunerative cancer quack promotion in medical history”.

However, this does not mean amygdalin has no therapeutic value, even though it is most emphatically not a vitamin.

The fruit kernels that contain amygdalin are known to have a wide range of positive effects on human health.

In fact, the high nutritional value of the fruit kernels makes them highly attractive to herbivores. Thus plant synthesis of amygdalin can be seen as a natural defense mechanism. 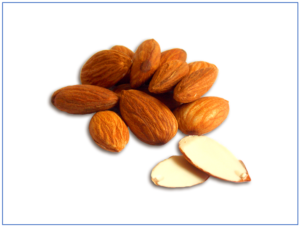 Mind the cyanogenic ciglucoside: Amygdalin is found in bitter almonds 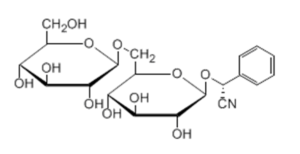