To get in touch with Pharmatrans Sanaq AG, simply fill out the form below.

Benefits & use of Pharmatrans neutral and functional pellets

Starter pellets are used in various forms and ways in oral solid dosage (OSD) forms to meet formulation needs. These pellets, which can also be known as seeds, beads, nonpareils, microgranules, and starter cores are usually applied to assist a multiparticulate final dosage form in achieving desired dissolution profile, specific release location or time, or in taste masking.

Pellets can be classified as being neutral substrates or functional ingredients, and both can serve as carriers for subsequent drug layering.

Neutral bead type starter pellets should be as inert as possible to prevent them from interacting with the API; merely serving as carriers to enable API layering, often followed by the application of a coating to mask off-tastes and/or modify API release.

In contrast, functional starter pellets actively support the formulation by improving API solubility, dissolution, or stability. API-matrix pellets combine an excipient and an API and can subsequently be coated to achieve the desired dissolution profile. In some cases, depending on the API’s characteristics and the technology used, it is possible to create pellets of 100 percent API and apply a functional coating to them.

Sugar spheres have been used in the pharmaceutical industry since the late 1960s and now form the most common carrier pellet. They are formed by layering a sucrose crystal with a sucrose-starch syrup or by applying a powder within a coating pan. Size of the crystal is key in determining sugar pellet sphericity, while properties like compressibility, friability, etc., are determined by the manufacturing process involved.

Pharmatrans Sanaq’s Sugar Spheres SANAQ® are neutral beads made of Sucrose and maize starch that meet standards defined in the USP40-NF35, Ph. Eur and JP pharmacopoeia monographies for “Sugar Spheres”. These white almost spherical cores with slight sweet taste can be used as neutral beads for the production of pellets loaded with active pharmaceutical ingredient (API). This makes them ideal for formulations demanding controlled or sustained release of the API, as well as in multiparticular system capsules, sachets or tablets, where the neutral bead starter cores can be combined with different technologies for layering and coating.

MCC neutral starter pellets are 100 percent composed of microcrystalline cellulose, usually manufactured by extrusion-spheronization or direct pelletization. Two fundamental advantages of the MCC-based multiple dosage form are homogeneous distribution of the active agent and the controlled release of active ingredients.

Mannitol pellets are neutral beads available or as pure Mannitol or as a mix of Mannitol along with other excipients.

Pharmatrans offers Cellets® as highly optimised MCC pellets available in particle sizes ranging from 100 µm to 500 µm and manufactured under GMP conditions using MCC from certified suppliers only. Cellets have advantages over sugar pellets in supporting innovative drug delivery dosage formulations optimized for homogeneous distribution and controlled release, as defined by the monographs of European and US pharmacopeias (Ph. Eur., USP-NF) and also offer a range of other benefits, including:

Functional starter pellets are the opposite of neutral beads in being intended to interact with the API and thereby achieve the targeted drug release profile. It is possible to use acidic or basic carriers, but the most adopted format is tartaric acid pellets, used to modulate the micro- environmental pH and thereby enhance API solubility, especially in sustained- release formulations, where they act as pH-modifiers of weakly basic APIs. Typically, the pellets are layered with the API to improve its solubility in a relatively higher pH environment, such as the lower GI tract. Once there, the highly soluble tartaric acid dissolves, decreasing the pH and facilitating API dissolution.

The Tartaric acid TAP pellets offered by Pharmatrans Sanaq are manufactured using a coating pan a continuous fluid-bed granulator for a highly spherical form with narrow particle size distribution (PSD) between 200 and 800 microns.

The large variety of excipients used to manufacture starter pellets has enabled formulators to develop new methods of delivery. While sugar spheres remain the standard for multiparticulate formulations, their continued dominance is not a foregone conclusion. In fact, alternatives—including functional cores—are likely to grow as specific and innovative solutions are sought to overcome different formulation challenges. At the same time, process techniques have evolved beyond the well- known extrusion-spheronization and granulation technologies. These newer processes provide a reliable means of manufacturing API-matrix and pure API pellets.

Learn how to ease load on granulation, increase productivity, profitability and reduce manufacturing costs with our Ready to use co-processed, direct compression excipient the DiCOM SANAQ 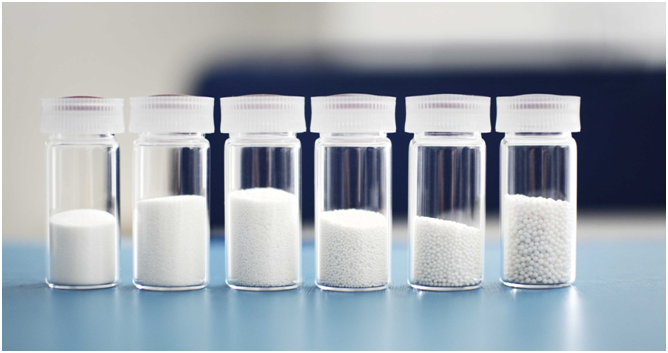 Simply fill out the form below to contact Pharmatrans Sanaq AG now.