The AquaSpark™ beta-D-glucuronide (A-8175_P00) is the first single-compound chemiluminescent substrate for E. coli detection. Upon hydrolytic cleavage the AquaSpark™ probe spontaneously emits a green light that allows for the sensitive detection of β-glucuronidase activity that is a primary indicator of E. coli contamination.

Ultra-fast and responsive assays using AquaSpark™ β-glucuronidase substrates for E. coli detection allows for faster detection of bacterial contamination in food and healthcare sectors as well as in the environment.

A member of the glycosyl hydrolase family, the β-glucuronidase enzyme (beta D-glucuronoside glucuronosohydrolase; EC 3.2.1.31) cleaves beta-D-glucopyranosuronic residues liberating a molecule of glucuronic acid and the remaining sugar molecule or aglycon.

The expression, sequence, structure, and function of human β-Glucuronidase (GUSB) have been comprehensively studied over the past decades, revealing that GUSB is an important lysosomal enzyme involved in the degradation of glucuronate-containing glycosaminoglycan. GUSB deficiency results in the accumulation of mucopolysaccharides in humans and is the leading cause for Mucopolysaccharidosis VII (‘Sly syndrome’).

In prokaryotes, the β-glucuronidase of Escherichia coli (GUS) is also well characterized. In the bacterial world it occurs almost exclusively in Escherichia coli (E. coli), the gram negative bacterium that inhabits the intestines of warm-blooded animals and is always found in feces.

The presence of E. coli is the most important indicator of fecal contamination of drinking water, surface water, food and beverages. Certain strains of E. coli are also human pathogens. Living cells of E. coli can be reliably detected with media that contain a substrate for β-glucuronidase, an enzyme that occurs in the microbial world mainly but with a few exceptions in E. coli. Many state-of-the-art E. coli tests are using this enzyme with defined substrates (Rice et. al, 1990).

The 4-Methylumbelliferyl beta-D-glucuronide (MUG) substrate is frequently used for detecting β-glucuronidase and is recommended in international guidelines as the fluorogenic substrate for E. coli detection.

The β-glucuronidase enzyme from E. coli (GUS) is one of the most popular reporter gene assays in plant molecular biology as it shows several useful characteristics:

The GUS gene encoding β-glucuronidase is frequently used to analyze the activity of a promoter either quantitatively or through visualization of its activity in different tissues. A wide range of plasmids that serve as plant GUS expression vectors is commercially available.

Biosynth’s chromogenic enzyme substrate X-gluc (5-bromo-4-chloro-3-indoxyl-beta-D-glucuronic acid (Biosynth Cat. No. B-7300) is traditionally applied in ‘GUS staining’ of genetically modified plants. The enzyme acts by cleaving the β-glucuronic acid from the substrate X-gluc and thus producing a blue color in transformed tissues. As X-gluc forms a blue precipitate it is mostly used for localization studies, while Biosynth’s fluorescent substrate MUG (4-Methylumbelliferyl-beta-D-glucuronic acid (Cat. No. M-5700) is typically used to measure the level of GUS gene expression.

Biosynth developed its strong emitting dioxetane-based AquaSpark™ chemiluminescence technology in partnership with Prof. Doron Shabat at the Tel Aviv University. The novel AquaSpark™ probes have significant advantages over conventional methods, bringing detection of specific enzyme activities to a level of sensitivity comparable to bioluminescent assays without the need of light producing enzymes (Luciferase).

In testing, β-glucuronidase positive E. coli and β-glucuronidase negative Klebsiella pneumonia cultures were inoculated in test tubes containing diluted Luria Bertani (LB) broth with an inducer for β-glucuronidase . After 6 hours of cultivation at 37°C , samples were drawn from the cultures and the bacteria were lysed for 30 minutes.

AquaSpark™ beta-D-glucuronide (50 µM) was added to the E. coli, the K. pneumonia lysate and to a sterile control solution. Chemiluminescence light emission was recorded for 20 minutes and the maximum emissions (relative light units, RLU) were used for quantification.

The time factor is highly significant since speed is a crucial factor in food and water control as well as in clinical analytics. AquaSpark™ chemiluminescence-based β-glucuronidase assays provide a new capability to detect E. coli bacteria contamination, even at low levels of E. coli -specific enzyme activity, much earlier in comparison to traditional bacteria stains or fluorescent dyes. 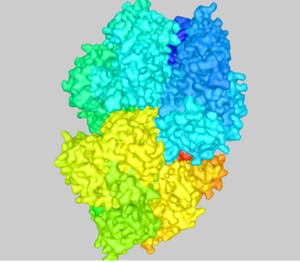 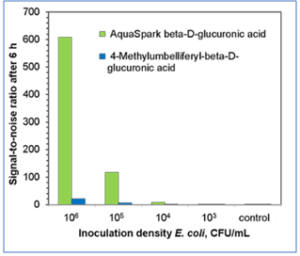 Comparison of signal-to-noise ratios achieved after 6 hours of E. coli cultivation, using either AquaSpark™ beta-D-glucuronide or MUG (4-Methylumbelliferyl-beta-D-glucuronic acid) for the detection of specific β-glucuronidase activity.