To get in touch with Nordic BioSite AB, simply fill out the form below.

Täby, Sweden: – In any experiment, the quality of your data will be influenced to a large extent by the quality of the sample(s) used. Flow cytometry is no exception to that rule.

No matter how careful you are, or what protocol you use to process samples for flow cytometry, you are likely to end up with some dead cells. Certain cell types are more sensitive to lengthy processing protocols than others, for example, bone marrow resident plasma cells. When you think of what flow cytometry is typically used for – counting and sorting cells – it is hardly surprising that it is critical to be able to accurately distinguish between dead and live cells to achieve meaningful results.

Live/Dead Cell Discrimination – Why Is This so Important?
Flow cytometry is regularly used to obtain an accurate cell count prior to seeding new cell cultures or preparing for functional assays, where the cell number greatly affects the outcome of the experiment. Having dead cells in your count will skew your downstream results, for example when measuring and comparing cytokine production in cell cultures in response to certain treatments.

Furthermore, since antibodies can react with epitopes in dead and dying cells, the inclusion of dead cells in any flow cytometry analysis can greatly impact how the experiment is interpreted.

How to Discriminate Between the Living and the Dead
Most dead/live dyes work by binding to molecules present on/in dead cells that are not normally accessible on healthy cells. The two most widely used dyes are the DNA-binding dyes and the amine dyes (Figure 1).

As cells die, their plasma membranes become permeable, and DNA is exposed. DNA-binding dyes, for example 7-AAD and propidium iodide (PI), fluoresce upon intercalation of DNA in dead or dying cells. Since these dyes are unable to pass intact plasma membranes, living cells exclude them and exhibit little to no fluorescence in their presence.

Although DNA dyes are easy to use and are relatively cost-effective, they do carry some considerable disadvantages:

Amine dyes react with primary amine groups on proteins. In healthy cells, these dyes can only bind to amines on the cell surface. However, dying cells become permeable to the dyes, where they can bind cytoplasmic proteins. The significantly higher number of intracellular proteins compared to those on the cell surface results in increased fluorescence in dying cells. This difference in staining intensity is used to calculate the number of dead cells present in a sample.

Unlike DNA-binding dyes, amine dyes are fixable, meaning that they can be used in cases where cell fixation is required. The dyes are added to a sample prior to fixation, and the staining pattern is maintained upon downstream fixation, for example, with methanol or ethanol.

Another major advantages to amine dyes over DNA-binding dyes is their availability in a wide range of excitation and emission spectra, providing great flexibility in multicolor panel setups.

Nordic BioSite supplies BioLegend’s Zombie dyes, a family of amine dyes that is available in a wide range of excitation and emission spectra, as depicted in Figure 2.

Nowadays, many researchers are using multicolor panels to detect multiple targets simultaneously. The wide range of Zombie colors available gives you great flexibility because you can just choose the color/channel that you are not using to detect a target. The table just below will help you to find the right staining strategy for your experimental needs! 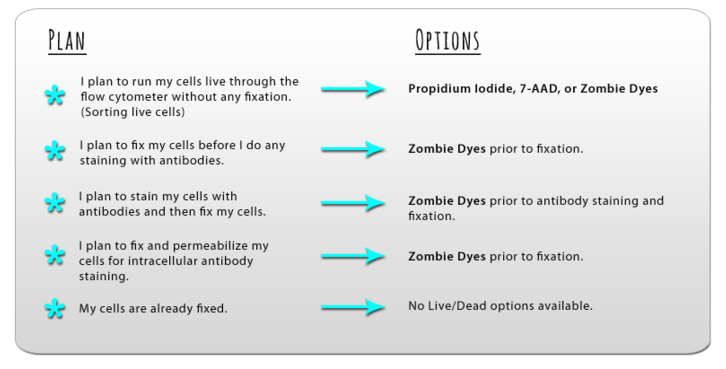 Want to know more? Get in touch with any of our team if you have questions or are interested in trying a Zombie for yourself. We look forward to hearing from you!

Simply fill out the form below to contact Nordic BioSite AB now.