To get in touch with Sovicell GmbH, simply fill out the form below.

The Microsomal Binding Kit is one of Sovicell’s range of ready-to-use assay systems for DMPK and ADMET studies.

The TRANSILXL Microsomal Binding assay kit is designed for automated liquid handlers or manual pipetting. It consists of ready-to-use 96-well microtiter plates. One plate can be used for measuring microsomal binding of up to 12 compounds.

In initial drug research, the main emphasis is on being able to predict the pharmacokinetics of the drug in humans to help identify candidates with appropriate characteristics, with metabolic clearance as a key parameter to be quantified.

This can be achieved either via extrapolation using allometry or through translating an understanding of metabolic stability in preclinical non-human species, liver microsomes and hepatocytes to those in human. In the latter case, there has often been the assumption that the concentration added to the microsome or hepatocyte incubation is the same as the unbound concentration in the incubation.

Recent research has shown that binding to microsomes and hepatocytes can be significant, and hence the unbound concentration is lower than the total concentration added, often resulting in a dramatic effect on the estimate of clearance. Consequently, it is important to estimate microsomal binding in these in vitro incubations.

Binding to microsomal membranes is often estimated as the free fraction of drug in incubations of microsomes (without cofactor) in dialysis rigs, requiring overnight incubations. These experiments can often suffer from compound instability through hydrolysis and precipitation of poorly soluble drugs. Moreover, the free fraction which is determined experimentally relates to the experimental concentration of microsomes which will in many cases differ from the incubations that have occurred with the metabolic stability experiments.

Use of the TRANSILXL Microsomal Binding Assay can overcome all these limitations.

In particular, mechanism based inhibitor studies can be affected to a large extent by microsomal binding, because of the high microsome concentrations that are typically employed in these experiments. Hence, the fraction of drug bound to microsomes is also an important correction of experiments assessing the inhibition potential.

The TRANSILXL Microsomal Binding Kit is compatible with a range of detection systems, including LC/MS/MS and Scintillation counting.

Parameters can be estimated and predicted for affinity to human liver microsomes, Human fu(mic), with applications for fu(mic) in other species being developed. 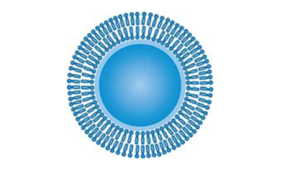 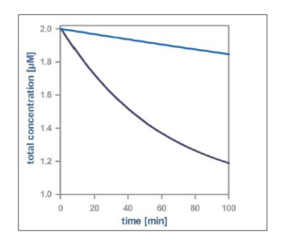 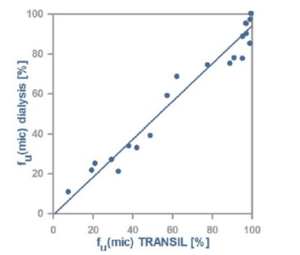 Simply fill out the form below to contact Sovicell GmbH now.